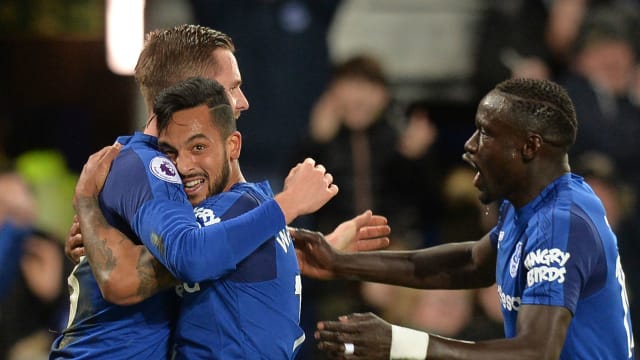 Theo Walcott scored his first goals for Everton to secure a 2-1 Premier League win over a Leicester City side desperately missing the presence of Riyad Mahrez.

The Algerian's move to league leaders Manchester City fell through on Wednesday and Claude Puel now faces a difficult challenge integrating him back into the Foxes squad for the rest of the season.

Leicester badly missed his pace and invention against a Toffees outfit inspired by England international Walcott, making only his second appearance for the club.

The 28-year-old, who joined the club from Arsenal this month, looked lively throughout and handed Sam Allardyce's side the lead after 25 minutes with a simple tap-in. He then grabbed a second before the interval with a clinical finish past Kasper Schmeichel.

Jamie Vardy set up a tense finale by drilling home a penalty with 19 minutes remaining, but Everton held on to secure a deserved three points.

The victory - in what was Sam Allardyce's 1000th game as a manager - ends a winless run of six games for Everton, while at the same time inflicting a first defeat in seven for Leicester.

Everton, who welcomed Seamus Coleman back into their starting XI after recovering from a broken leg suffered in March, started brightly and only a smart stop by Schmeichel prevented Walcott from giving them an early lead.

Leicester responded well, though, and came agonisingly close to breaking the deadlock after 10 minutes when Wilfred Ndidi's looping header bounced back off Jordan Pickford's crossbar.

Walcott then got off the mark for his new club midway through the first half after some sloppy defending from Ben Chilwell.

The left-back was caught in possession on the edge of his own area by Gylfi Sigurdsson, who slid a precise ball across the face of the goal for Walcott to slot past an exposed Schmeichel.

Oumar Niasse somehow failed to double their advantage after 37 minutes when he inexplicably dragged his shot wide from eight yards.

His blushes were spared just two minutes later, however, as Walcott latched onto a woeful header from Daniel Amartey to send a cool first-time volley past Schmeichel.

Seemingly content with their two-goal cushion, Everton posed little threat for much of the second half.

That lack of ambition was punished in the 71st minute when Wayne Rooney was adjudged to have held Ndidi in the penalty area and Vardy thumped home the resulting spot-kick.

Substitute Kelechi Iheanacho then twice came within inches of netting an unlikely leveller five minutes later. He initially flicked an effort onto the crossbar from point-blank range before crashing the follow-up against the post.

Cuco Martina then cleared Matty James' goal-bound effort as Leicester continued to crank up the pressure in the closing stages, but Everton held firm to secure a first win since December 18.