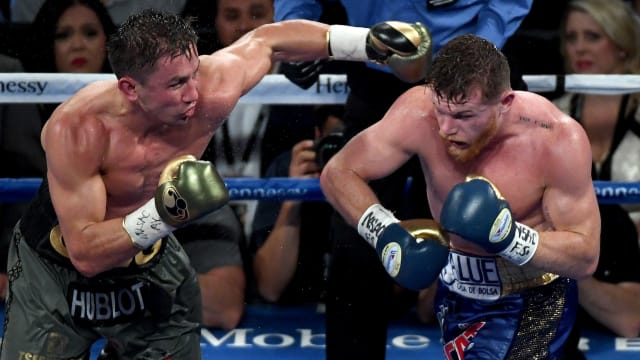 The rematch between Gennady Golovkin and Saul 'Canelo' Alvarez has been confirmed, with the fighters set to do battle again on May 5.

Alvarez and Golovkin produced a stirring fight in September last year, with one of the most anticipated bouts in recent history ending in a contentious draw.

Mexican Alvarez was awarded a questionable 118-110 scoreline by judge Adalaide Byrd after a contest Golovkin was widely believed to have edged.

A rematch was soon called for by both camps and, after Alvarez's promoters Golden Boy Promotions revealed they had agreed on a Cinco De Mayo bout, a second meeting has now been confirmed, with former WWE superstar and actor Dwayne 'The Rock' Johnson' making the announcement for HBO.

Only a true baller can announce the fight of the year.@TheRock makes Canelo vs. Golovkin 2 official. 5.5.18. #CaneloGGG2pic.twitter.com/WI99kzxraM

No details of a venue or what belts will be on the line have been revealed. The first bout saw Golovkin put his WBA and IBF middleweight straps up for grabs.

"I'm delighted to once again participate in one of the most important boxing events in history," said Alvarez. "This second fight is for the benefit and pleasure of all fans who desire to see the best fight the best.

"This time, [Gennady] Golovkin won't have any excuses regarding the judges because I'm coming to knock him out."

"I didn't agree with some of the judges' decisions in the first fight. This time there will be no doubt. I am leaving the ring as the middleweight champion of the world."