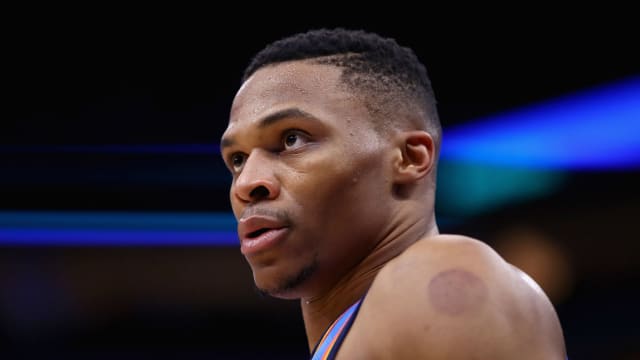 After a brutally slow start to the season, the Oklahoma City Thunder are starting to look like NBA contenders following their 122-112 win over the Philadelphia 76ers.

Oklahoma City made it eight straight wins by seeing off the in-form 76ers on Sunday.

The Thunder trailed by one point at half-time, but outscored the 76ers 35-25 in the third quarter.

Center Steven Adams dominated both ends of the court, scoring 20 points on 10-of-11 shooting while hauling in 13 rebounds.

Philadelphia (24-22) have still won five of their last seven games, while the win moved the Thunder (30-20) into fifth in the Western Conference standings.

Cleveland Cavaliers star LeBron James flirted with yet another triple-double in a 121-104 win over the reeling Detroit Pistons. James scored a game-high 25 points with 14 assists and eight rebounds. Kevin Love added 20 points and 11 rebounds to shake off last week's controversy.

Chicago Bulls guard Zach LaVine scored just six points on two-of-11 shooting (0 of five from three-point range) in a 110-96 loss to the Milwaukee Bucks. LaVine had five rebounds and five assists, but Denzel Valentine made a case for starting after scoring 18 points on eight-of-12 shooting.

BOOKER FROM BEYOND THE ARC!

Devin Booker hit a sweet step-back three-pointer before leaving the Phoenix Suns' 113-102 loss to the Houston Rockets. Booker scored 31 points with 10 assists but left late with an injury.

Devin Booker steps back and fires from distance!

2:00 left to play on @NBATVpic.twitter.com/ARmBlv3BaS

Denver, one of the most underrated and well-balanced teams in the league, are fresh off a three-game winning streak. The Boston Celtics have struggled in January, but continue to lead the Eastern Conference. Nuggets shooting guard Gary Harris is enjoying a breakout season, averaging 17.3 points per game.