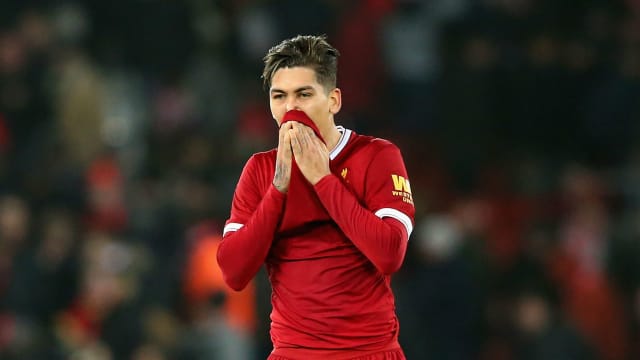 Liverpool have been dumped out of the FA Cup following a 3-2 fourth-round defeat to West Brom at Anfield, while a late goal from Harry Kane rescued a 1-1 draw for Tottenham at Newport County.

An early goal from Roberto Firmino looked set to put Liverpool on the path to victory, but a pair of quickfire goals from Jay Rodriguez preceded a three-minute period of VAR drama before West Brom emerged on top.

Grigg took his tally to six goals in this season's competition as Wigan followed up a third-round success over Bournemouth with another victory over top-flight opposition.

Swansea City have shown improvement under their new coach Carlos Carvalhal but were held at Notts County, while League Two side Coventry City booked a place in the fifth round with a win at MK Dons and Javi Gracia's first game in charge of Watford ended in defeat.

The newly introduced VAR system played a central role as Liverpool crashed out to an impressive West Brom.

Jurgen Klopp's side saw an early lead overturned in the first 11 minutes, with Rodriguez scoring twice after Firmino's lobbed opener, and the visitors netted for a third time through Craig Dawson only for a referral to the video assistant referee to rule out the goal for offside against Gareth Barry.

Liverpool were awarded a penalty after another VAR review three minutes later, but Firmino missed from the spot, and Joel Matip's own goal just before the interval ultimately proved decisive despite a second-half Mohamed Salah strike.

What a performance that was

Padraig Amond's first-half header deservedly put Newport ahead and they went close to hanging on, but denied by Kane eight minutes from time to earn Spurs another bite of the cherry in a Wembley replay.

Wigan are no strangers to cup shocks, of course, having triumphed against the odds to beat Manchester City in the 2013 final, although Roberto Martinez's men were relegated from the Premier League in the same season.

Top of League One, Wigan are full of confidence and they took just seven minutes to take the lead at the DW Stadium, Grigg on target from Nathan Byrne's assist.

Will Grigg's on fire #FACup

West Ham's chances of launching a second-half fightback were hit when Arthur Masuaku was sent-off shortly after the restart, the left-back dismissed after spitting at Nick Powell, David Moyes condemning the player's "despicable" actions.

Wigan secured their place in the fifth round via another Grigg goal, the Northern Ireland international converting a penalty awarded for a handball by Reece Burke.

What a performance from the boys... @NPowell25 outstanding! #wafc pic.twitter.com/UcbSrIUbaS

Although Swansea City remain bottom of the Premier League, Carvalhal had overseen victories in their last two matches - including a win against Liverpool - ahead of Saturday's trip to Notts County.

Remarkably, the League Two promotion contenders - led by Kevin Nolan - named a starting XI with a combined number of Premier League appearances of 517, more than the 468 in the Swansea team.

After Renato Sanches was forced off through injury, Swansea took the lead on the stroke of half-time with a goal from Luciano Narsingh, but one of County's former Premier League players came up with the equaliser - Jon Stead turning home from close range to keep up his run of scoring in every round of this season's FA Cup.

| Jon Stead gives his thoughts after securing our place in the fifth-round draw pic.twitter.com/4EKtl7oY3X

Leicester City thumped Peterborough United 5-1 with Kelechi Iheanacho scoring a brace for the second round in a row, while Fousseni Diabate also netted twice on his Foxes debut.

Brighton and Hove Albion striker Glenn Murray came off the bench to down Middlesbrough 1-0, but Huddersfield Town will need a replay after they drew 1-1 at home to Birmingham City as Lukas Jutkiewicz scored in his fourth straight FA Cup start.

Joining fellow League Two side County in the fifth-round draw are Coventry City, who won 1-0 at MK Dons.

Max Biamou scored the only goal of the game, knocking home a Jack Grimmer cross to send Mark Robins' men through against their League One hosts.

MAX BIAMOU FIRES THE #SKYBLUES INTO THE FIFTH ROUND! #PUSB pic.twitter.com/ALWMKPudqt

Watford wasted no time in appointing Javi Gracia as the successor to the sacked Marco Silva, but the Spaniard's reign started with an FA Cup defeat at the hands of Southampton thanks to birthday boy Jack Stephens.

Rochdale are in danger of slipping into League Two but they earned a replay at home after a 2-2 draw at Championship side Millwall, while the tie between Sheffield United and Preston North End saw the Blades edge through 1-0, Billy Sharp scoring the winner with 10 minutes to go.

And after conquering holders Arsenal in the last round, Nottingham Forest went out with a 2-1 loss at fellow second-tier team Hull City, Jarrod Bowen scoring and providing an assist for Nouha Dicko.