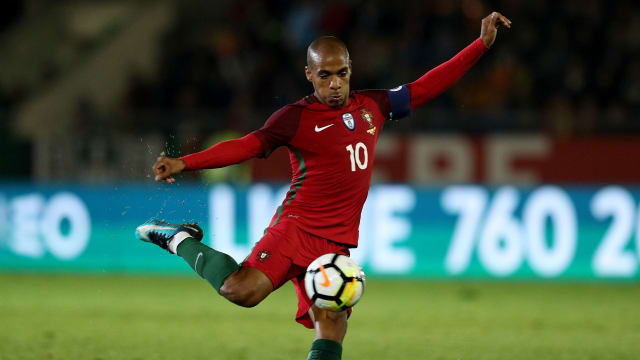 Inter midfielder Joao Mario is having a medical at West Ham with a view to a loan move to the Premier League side, manager David Moyes has confirmed.

Joao Mario joined Inter for an initial EUR40million from Sporting CP after helping Portugal to Euro 2016 glory, featuring in every match for Fernando Santos' side in France.

But he has struggled for first-team opportunities at Inter under Luciano Spalletti this season, and has been restricted to five starts in Serie A - although the 25-year-old has also managed to supply five assists in Italy's top flight.

Asked whether reports of Joao Mario having a medical at West Ham were accurate, Moyes told a news conference to preview Saturday's FA Cup fourth-round trip to Wigan: "Your sources are correct. It is a loan, I'll be able to tell you more once it's done."

Sky Sports has reported West Ham will have a £26million option to make the loan move permanent at the end of this season.

Moyes maintained he is in no hurry to move any players on this month, amid reports Galatasaray have entered the running to sign Andre Ayew, alongside the Ghana forward's former club Swansea City.

"I've never said we want anyone to go. If someone comes up we will look at it but as far as I am concerned, no-one is going," Moyes said, before adding that an offer from an unnamed club below West Ham's valuation for Ayew had arrived.

"I think there has been an offer but we wouldn't accept the current bid as it is."

West Ham have climbed up to 11th in the Premier League table under the former Everton and Manchester United manager, four points above the relegation zone.