Djokovic and Thiem stunned at Australian Open, Federer eases through 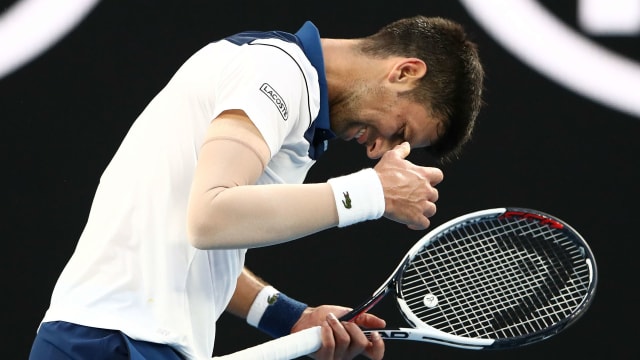 There were two big shocks on Monday at the Australian Open as both Novak Djokovic and Dominic Thiem missed out on places in the men's quarter-finals.

Injury affected six-time winner Djokovic as he was beaten by Hyeon Chung in straight sets, while Tennys Sandgren got the better of Thiem after an entertaining five-set battle.

Defending champion Roger Federer had no such trouble as he cruised past Marton Fucsovics.

That victory set up a last-eight clash with Tomas Berdych, who was similarly dominant against Fabio Fognini and will now look to finally beat Federer in Melbourne at the fifth time of asking.

A hip complaint had hindered former world number one Djokovic in the third round and it quickly became clear that his right elbow, covered in a protective sleeve, was going to affect his chances of reaching the last eight.

Even then, the Serb was perhaps unfortunate to come face to face with an outstanding young player who possessed the talent to punish his every error.

The match may only have lasted three sets, but it thrilled the Melbourne crowd and there was a great deal of mutual respect as the defeated Djokovic approached Chung at the end.

If Djokovic's defeat could be attributed to his injury problems, there was no excuse for Thiem as he was stunned by Sandgren.

Sandgren later pondered if he could be dreaming, but he must now prepare for a quarter-final against Chung in which the ATP rankings suggest he should at least have a fighting chance.

It always looked like second seed Federer had been handed a kind draw in Melbourne and so it has proved, with the five-time champion reaching the quarter-finals without dropping a set.

Fucsovics was the latest victim of the imperious Swiss, going down 6-4 7-6 (7-3) 6-2, as Federer showed no mercy to a player he is familiar with from a series of practice encounters.

Sure there's a few success stories to swap there...#AusOpenpic.twitter.com/DK0pVwdIaW

"It's been a while," Federer said afterwards. "I started forgetting a little bit on how he played exactly.

"The goal for me was really trying to be focused on my own game and take it to him and play tough."

...AND FACES BERDYCH YET AGAIN

If Federer has had it easy so far, he should - in theory - be tested rather more by Berdych after the Czech defeated Fognini 6-1 6-4 6-4.

But the defending champion seems to enjoy facing Berdych, who he defeated in the third round last year and has never lost to at the Australian Open.

"I'm looking forward to playing against him," he said after learning the identity of his quarter-final opponent.

Berdych responded optimistically: "I'm going to go out there, try my best, try to play good tennis, and believe myself that I can do it."

That's the way to celebrate the win today #icebath#teamtb#ausopenpic.twitter.com/0sj7zTtatR