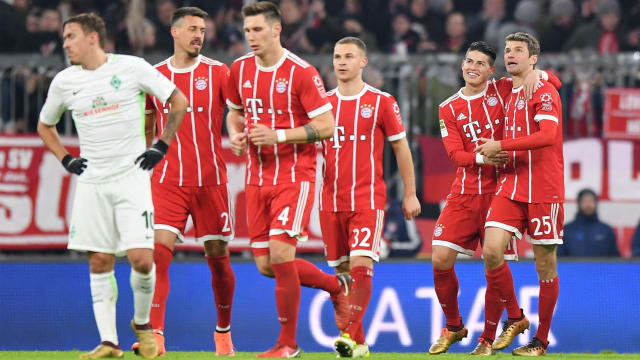 Thomas Muller and the returning Robert Lewandowski scored two apiece as Bayern Munich earned a come-from-behind 4-2 win over struggling Werder Bremen despite an underwhelming showing from the champions.

Bremen took the lead through Jerome Gondorf and hit back after Muller and Lewandowski - back from a knee injury - had turned things around, a Niklas Sule own goal levelling matters in the 74th minute.

But the same Bayern double act stepped up to the plate when needed, with Muller's second strike representing his 100th Bundesliga goal.

The away side showed few signs of this season's struggles during the first half, hitting the post early on and then scoring in the 25th minute through Gondorf, as the performance belied their lowly league position of 16th.

Inevitably Bayern fought back and equalised four minutes before half-time, with Muller netting his third league goal of the season in style.

Lewandowski then grabbed his first just after the hour, giving Bayern - who were far from their fluid best - the lead for the first time, though that did not last long as Sule put past his own goalkeeper.

But the champions turned on the style late on, Lewandowski powering in a header and Muller adding a landmark strike.

That was fun, wasn't it @werderbremen_en pushed us all the way, but @lewy_official and @esmuellert_ made the difference in the end to claim all the points!  #FCBSVW 4-2 pic.twitter.com/em3Vq87t4F

Bayern went into the match having won each of their last 14 top-flight games against Bremen, a league record, and that arguably could have been a contributing factor to a somewhat complacent performance.

The visitors went agonisingly to going ahead just seven minutes in, as Max Kruse met Ludwig Augustinsson's cross and headed it onto the right-hand upright.

And Bremen got their shock lead with 25 minutes played, as Gondorf latched on to Kruse's clever reverse pass and squeezed an effort through Sven Ulreich's legs.

But the hosts levelled just before the break - Muller finishing acrobatically from close range after chesting Jerome Boateng's cross over Milos Veljkovic.

Seemingly frustrated with his team's continued ineffectiveness after the break, Jupp Heynckes introduced Arturo Vidal and Kingsley Coman from the bench just before the hour.

And the Chilean nearly made a quick impact, forcing Jiri Pavlenka into an important save with a testing volley.

Bayern went ahead soon after, though, as Lewandowski met James Rodriguez's corner and headed past the helpless Pavlenka.

Another corner at the other end saw the parity restored again 16 minutes from time - Sule nudging a delivery past Ulreich after the goalkeeper had previously made a mess of a tussle with Kruse.

But Bayern stepped things up a notch, with Lewandowski heading in Muller's cross two minutes later and the German finally finished Bremen off in the 84th minute, neatly tucking past Pavlenka following James' sumptuous chipped pass.