Sleep and chocolate - Halep too exhausted to think about tennis 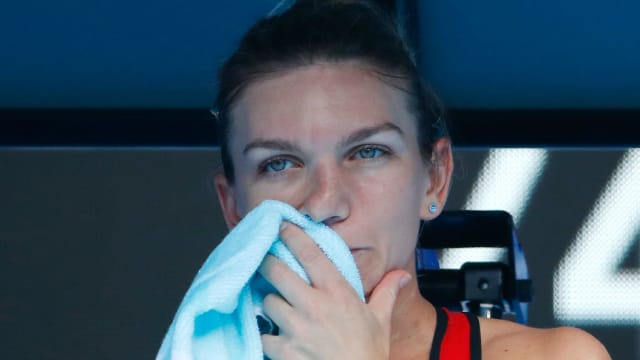 Exhausted following her record-equalling marathon against Lauren Davis at the Australian Open, world number one Simona Halep only wanted to think about sleep and chocolate.

After 48 games and three hours, 45 minutes on court, Halep booked her spot in the fourth round courtesy of Saturday's epic 4-6 6-4 15-13 victory over the unseeded American in Melbourne.

It was the joint-most games played in a women's singles match at the Australian Open - tying the record set by Chanda Rubin and Arantxa Sanchez Vicario in 1996.

And Halep, already nursing an ankle injury after her first-round victory against Australian qualifier Destanee Aiava, was keen to bypass tennis talk.

Following initial questions regarding the match, Halep was asked about her next opponent - either Ashleigh Barty or Naomi Osaka - and the Romanian star smiled before saying: "You still want me to think about tennis now?"

Quizzed on what she wanted to think about, Halep told reporters: "Some sleep, some chocolate, and actually hot chocolate I will have after."

Halep, who admitted her ankle is still a problem heading into the fourth round, was far from convincing on Rod Laver Arena, struggling to contain the impressive Davis, who took out the opening set.

The grand slam hopeful went on to level the match and she looked set to close it out at 5-4, and again at 6-5 and 8-7, but Halep squandered all three chances.

Halep also saved three match points before claiming the break in the 47th game and crucially holding to end the titanic tussle in front of an appreciative Australian crowd.

"It definitely was a very tough match. It's the only one match that I played like this," Halep said. "I was down also love-40. She had three match balls. It was not easy, but I just kept playing.

"I just kept believing that it's not over, even if she's leading a little bit more. I gave everything I had, and actually, I'm really proud that I could stay there and win it. It was not easy at all. She played great."

On the the three match points she faced against Davis - who lost a toenail in the final set - Halep continued: "I thought it's over at that moment, but it was good because I relaxed my arm and I served pretty well those three balls. And then she took the medical. I had time to calm down.

"I had come to believe again, to restart the mind. I found more energy after that three-minute break. But at 13-all when I took the game, I said it's my lucky number."