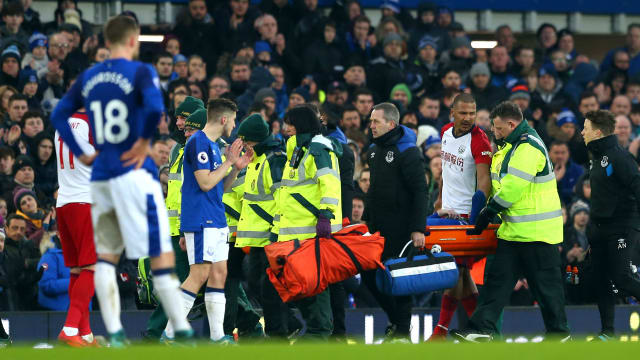 James McCarthy suffered a suspected broken leg as Everton ended a run of three straight defeats with a 1-1 draw against West Brom at Goodison Park.

McCarthy suffered the horrific injury 10 minutes after the interval as he was attempting to block Salomon Rondon's shot inside the penalty area, with the Venezuelan kicking his planted standing leg at full force.

The Irishman was attended to by medical staff for more than seven minutes, while a clearly distraught Rondon had to be comforted by his team-mates.

The Baggies had taken an early lead through Jay Rodriguez's fourth Premier League goal of the season, but Sam Allardyce's side pulled themselves level in the 70th minute through Oumar Niasse's first touch of the game.

Senegal forward Niasse had only just been introduced for the ineffective Cenk Tosun - a decision that was greeted with boos by Everton fans - when he met debutant Theo Walcott's precise back-post header to thunder a volley into the roof of the net.

Walcott himself came close to grabbing a dramatic late winner, but West Brom held on for a valuable away point ahead of daunting trips to Liverpool in the FA Cup and Manchester City in the league.

Clearly buoyed by their win over Brighton and Hove Albion last weekend, West Brom started in confident fashion and Grzegorz Krychowiak should have opened the scoring inside five minutes, instead lashing over after being played through by Rondon.

The Pole made amends just 60 seconds later, though, lofting a delightful pass over a static Toffees backline to release Rodriguez, who calmly slotted past the onrushing Jordan Pickford and into the bottom corner.

The goal failed to spark the hosts into life and they had to wait until the 38th minute for their first shot on target. Jonjoe Kenny's whipped effort from outside the penalty area was comfortably held by Ben Foster and was duly greeted with sarcastic cheers by the Goodison Park faithful.

They could have had further reason to lambast their team moments before the interval had Rondon been able to keep his powerful header under the crossbar.

Yannick Bolasie was thrown on at the break in an attempt to inject some urgency into Everton's lacklustre attack, but any momentum he provided was cut short by McCarthy's injury.

Both sides were understandably cautious in the minutes following the lengthy stoppage, but the introduction of Niasse sparked the game back into life.

Fellow substitute Wayne Rooney lofted a cross to the back post, which was headed into Niasse by Walcott, and the striker crashed a superb first-time volley past Foster to set up a frantic finale.

Walcott was denied a debut winner as Foster did well to block his fierce volley, while Rondon missed a number of clear openings to test Pickford, before rattling the crossbar from 25 yards to keep the Baggies in 19th, now three points from safety.

- Everton have gone six top-flight games without a win (D3 L3), their longest run without a victory since April 2016 (7).
- Theo Walcott started a Premier League game for the first time since April 26th (Arsenal v Leicester), 269 days ago.
- Walcott registered his first Premier League assist in 28 games, since October 2nd 2016 (Arsenal v Burnley), 475 days ago.
- Jay Rodriguez has had a hand in three goals in his last four Premier League games (2 goals, 1 assist), one more than he managed in his previous 19 for West Brom this season.
- Oumar Niasse has scored four goals as a substitute in the Premier League this season, a joint-high along with Olivier Giroud and Anthony Martial.
- Niasse scored just 56 seconds after coming off the bench, making the goal the fastest by a sub in the Premier League this season.