Walcott left Arsenal with his things in bin bags 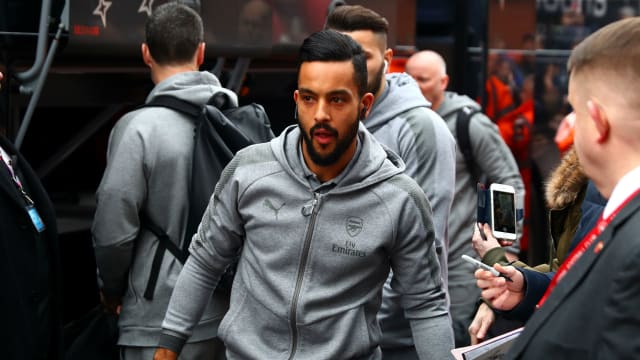 Theo Walcott will make time for proper goodbyes with his old Arsenal colleagues after a rushed exit to Everton left him with his belongings in bin bags.

England international Walcott ended a 12-year association with the Gunners when he joined Everton in a £20million deal this week, having fallen down the pecking order at Emirates Stadium.

And the 28-year-old told a news conference on Thursday there was no great fanfare when he came to leave Arsenal's training ground.

"When I found that I was coming here I had to go there at night just to pick up all my stuff in binbags," he said, much to the amusement of new boss Sam Allardyce.

"That's loyalty for you," the well-travelled Allardyce chortled. "I've had a few of those - you have to sneak in and sneak out."

Walcott went on to explain he is keen to say more prolonged farewells, while relishing Everton's trip to north London on February 3.

"I've spoken to the gaffer [Arsene Wenger] and I'm sure I'll get some time to go back and catch up with people and do my proper goodbyes. That's the right way to do it," he added.

"We do also play them soon as well, which I'm looking forward to.

"I've always had so much time for the fans and they've been great to me, through all our ups and downs. I can't thank them enough. It's part of my family, Arsenal."

TW: I feel like Everton are on the up. The Club has a fantastic history and I want to help bring that history into the present.

Walcott scored 19 times last season but found himself out of favour with Wenger this time around.

Nevertheless, his respect for the man who plucked him from Southampton as a teenager remains undiminished.

"I've always had so much respect for the manager. For whatever reason it didn't happen this year, that's why I've moved on. I just want to work hard for this team

"I've known him since I was 16 - to bring a young player in and have faith in him, I can't thank him enough."

Managers at international level have not been such a mainstay during Walcott's up-and-down career with England, but his time in the squad during Allardyce's fleeting time in charge left an impression.

"I had a brief spell with the manager with England I and I felt like I wanted more of that," he explained, ahead of a prospective Everton debut at home to West Brom on Saturday

"I wanted to be part of something and part of his plans."