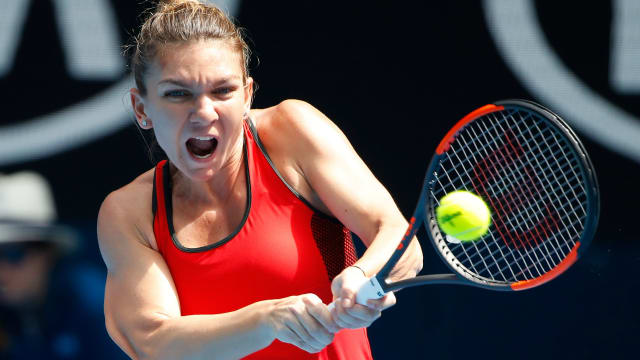 World number one Simona Halep survived a titanic tussle as she outlasted Lauren Davis to reach the Australian Open fourth in a record-equalling marathon Saturday.

In a clash for the ages, Halep prevailed 4-6 6-4 15-13 to equal the record for the longest women's match based on games played at the Australian Open - 48 set by Chanda Rubin and Arantxa Sanchez Vicario in 1996.

Halep had three chances to close it out in the final set, while the Romania star also saved three match points down 11-10 to the unseeded American, who lost a toenail, as she triumphed after three hours, 45 minutes in Melbourne.

Bidding to win her maiden grand slam in the absence of 23-time grand slam champion Serena Williams, Halep - through to the fourth round of the Australian Open for the first time since 2015 - will face either 18th seed Ashleigh Barty or Naomi Osaka in the next round.

There's no other way to describe it. #AusOpenpic.twitter.com/yh3yHzhbUV

Halep and Davis were greeted with much cooler conditions in Melbourne following back-to-back days of scorching temperatures - Friday reaching 42 degrees celsius - and it made for great tennis on Rod Laver Arena.

She worked Halep around the court with some fine groundstrokes and winners down the line, though she came unstuck in the fifth game, broken to 30 as the latter took a 3-2 lead.

But Halep was unable to consolidate, double-faulting to gift the break straight back to Davis, who continued to find winners down the line and she went on to close out the first set on her opponent's serve.

Halep dug deep in the second set, doing what she was unable to do in the first set - breaking in the third game and consolidating as she levelled the match.

Halep looked set to push on to the fourth round, taking a 3-1 lead, but Davis was not overawed, the 24-year-old continuing to play her shots and breaking at the fifth time of asking in the sixth game to level at 3-3 in the final set.

Simona Halep and Lauren Davis just played the most games of any women's match in Australian Open history. #AusOpenpic.twitter.com/9fFEWHAGCj

The break of serves continued as Halep failed to clinch the match at 5-4, 6-5 and 8-7, while Davis then wasted three match points in the 22nd game in her attempt to reach the fourth round of a grand slam for the first time in her career.

The never-ending clash finally came to a conclusion when Halep broke in the 27th game before crucially holding serve as the clock closed in on the four-hour mark.