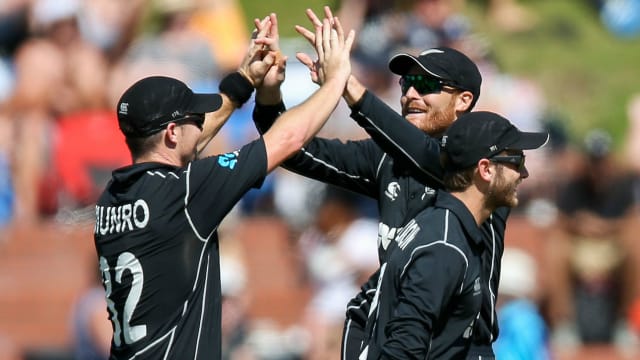 New Zealand completed a 5-0 whitewash of the one-day international series, despite a late fightback by Pakistan in the fifth and final ODI on Friday.

Pakistan's top order crumbled in reply to New Zealand's 271-7 but the tourists rallied to lose by only 15 runs in a nail-biting finish at Basin Reserve in Wellington.

The Pakistanis were facing another comprehensive defeat after Martin Guptill's 13th ODI century and Matt Henry's fine performance with the ball, which left the visitors reeling at 57-5.

Kane Williamson leads his team off after claiming the victory at the Basin Reserve and a 5-0 sweep #nzvpakpic.twitter.com/0gVqBJxaqH

But Pakistan were made to pay for their slow start, New Zealand surviving to win a bilateral ODI series 5-0 for just the second time in history.

The 31-year-old Guptill and Ross Taylor (59), who posted his 41st half-century, combined for 112 runs after Colin Munro and Williamson made decent starts but failed to push on.

That brought Guptill and Taylor together, and while Pakistan managed to slow New Zealand's scoring, the pair were able to celebrate milestones.

WOW - that got close ... very close!
Terrific rearguard action by Pakistan takes them within 15 runs, but Henry (4-53) holds his nerve in the 49th over to seal a 12th straight victory #NZvPAKpic.twitter.com/UVoF2RpWQo

Guptill, who had a life on 72 after slipping over as Faheem Ashraf (2-49) missed the stumps in a run-out chance, brought up his ton off 125 balls but his innings was ended with the next delivery when he was caught by Mohammad Hafeez off Rumman as he tried to lift the ball over leg side.

His wicket triggered a middle-order collapse as the New Zealanders lost 31-4, including three in the space of five runs after Taylor followed Guptill back to the pavilion.