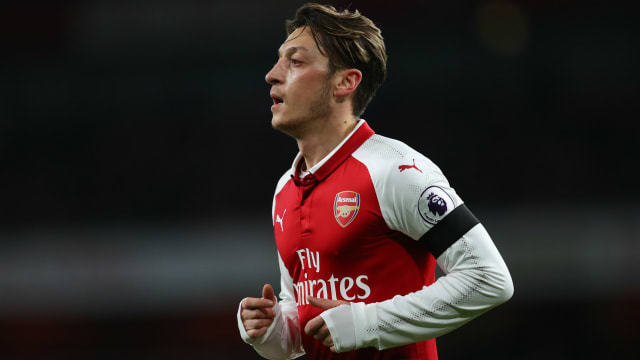 Arsenal boss Arsene Wenger has ruled out selling Mesut Ozil in the transfer window and has confirmed talks over Jack Wilshere's new contract are ongoing.

Ozil's future has been the subject of speculation for some months, with the Germany international's deal expiring at the end of the season.

Arsenal appear ready to sell Alexis Sanchez to Manchester United, most likely in a deal that includes Henrikh Mkhitaryan moving to Emirates Stadium, in order to avoid losing the forward for nothing when his contract runs out.

There are no such plans to allow Ozil to leave, however, despite the similar risk of losing the player on a free transfer.

Speaking ahead of his side's Premier League clash with Crystal Palace on Saturday, Wenger told a news conference: "Maybe Ozil will be back. So that's the good news."

Asked if the playmaker will still be an Arsenal player after the transfer window closes, Wenger replied: "In February? Yes, of course."

Wenger also admitted that the Gunners have yet to agree a wage packet with Wilshere, although they are keen for him to sign a new deal at the club.

"After that we have to find a financial agreement with Jack that is good for him. That's what we're trying to do."

Wenger also paid tribute to Theo Walcott after the forward completed a move to Everton for a reported fee of £20million.

"My memories go for over 12 years," he said of the England international, who joined from Southampton at the age of 16 in 2006.

"Personally, I'm very attached to Theo because he's intelligent, has complete integrity. I remember he arrived at the age of 16 and went to the World Cup straight away.

"He scored important goals in big games, you talk about FA Cup finals, Champions League games, local derbies. I regret what happened but he didn't play enough recently. I wish him well and thank him for everything he's done for us. He's always welcome here."

When @theowalcott scored twice in the north London derby... pic.twitter.com/yI44BAgIel