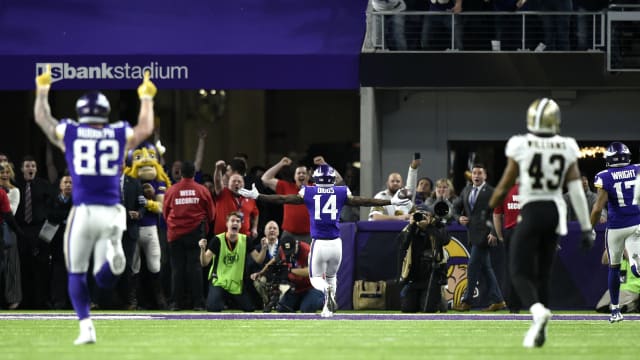 The Minnesota Vikings clinched a place in the NFC Championship Game with a play that will go down in NFL playoff folklore as they defeated the New Orleans Saints on Sunday.

It sent U.S. Bank Stadium into raptures and kept alive the Vikings' hopes of playing a Super Bowl in their home stadium, with Minnesota now just a game away from the showpiece on February 4.

But where does it rank in the greatest finishes in playoff history? Here we rank the top five postseason climaxes of all time.

In a game dominated by the two defenses, perhaps the famous and most bizarre bounce of the ball in NFL history propelled the Pittsburgh Steelers to the AFC Championship Game. Quarterback Terry Bradshaw's fourth-down pass on Pittsburgh's own 40-yard line cannoned off the shoulder of Oakland Raiders safety Jack Tatum and was scooped up by fullback Franco Harris, who took it the distance to give the Steelers victory in the the most unexpected of fashions. Debate still rages as to whether the ball hit the ground before Harris caught it, just don't suggest that it did and expect to be popular in Pittsburgh.

OK, so the exact name for this play is still being debated. The suggestion of 'The Stone Skol Stunner' may be popular among wrestling fans, but the Vikings' triumph provided a late twist that not even Vince McMahon could script. With 10 seconds left and needing a field goal to win, Keenum fired down the sideline from his own 39-yard line and, despite finding a leaping Diggs, his efforts looked set to be in vain as long as the receiver was tackled in bounds due to the Vikings having no timeouts left. However, rookie safety Marcus Williams made the ill-advised decision to dive low at Diggs' legs, completely missing the tackle and giving Diggs a clear run to the line to send U.S. Bank Stadium into utter pandemonium.

The most famous play in San Francisco's sporting history brought about arguably the most recognisable and greatest image in NFL history. The still of Dwight Clark leaping at the back of the endzone to make the game-winning touchdown catch in the NFC Championship features in many a montage to this day and for good reason, as his reception served as the incredible deciding moment in a game that defined the 1980s. Rolling out to his right, Joe Montana dropped on to his back foot with three Cowboys defenders in his face and lofted a perfect pass to Clark, turning Candlestick Park - as legendary broadcaster Vin Scully put it - into a "madhouse". It signalled the start of a dynasty for the 49ers, who went on to win the first of five Super Bowls and four in that decade, while the Cowboys went from perennial power to also-ran.

Leading 16-15 with 16 seconds left after kicking what looked to be a game-winning field goal, the Buffalo Bills had plenty of reason to be confident of victory in the Wild Card round in Tennessee, but they fell victim to a one-in-a-million special teams play. Titans fullback Lorenzo Neal collected the ensuing kick-off and handed the ball to tight end Frank Wycheck, who then threw it back across the field to Kevin Dyson. Finding a running lane and blockers, Dyson surged down the left sideline and into the endzone to devastate the Bills and keep alive a Titans playoff campaign that ended in Super Bowl heartache. The Titans were beaten 23-16 by the St. Louis Rams in Super Bowl XXXIV as Dyson was tackled one-yard shy of the game-tying score as time expired.

Though James White's game-winning touchdown in Super Bowl LI was not the most spectacular play, it was the preceding fightback that made it the best finish in playoff history. The New England Patriots appeared destined for defeat when they trailed 28-3 to the Atlanta Falcons and still went into the fourth quarter 28-9 down. However, Tom Brady led the Patriots all the way back to force overtime, with White's clinching score capping off the greatest comeback in Super Bowl history and, in the eyes of many, securing Brady's place as the greatest quarterback of all time.