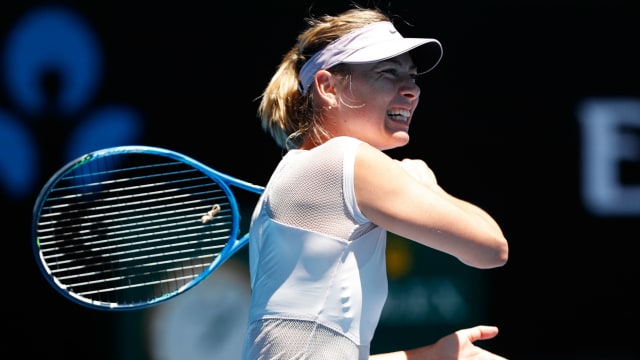 Former world number one Maria Sharapova made a winning return to the Australian Open, accounting for Tatjana Maria in the first round on Tuesday.

Sharapova is back in Australia for the first time since her suspension after a doping violation at the grand slam in 2016.

The five-time major champion served a 15-month ban having tested positive for meldonium.

The '08 champ is through to 2R with a 6-1 6-4 victory over Tatjana #Maria.#AusOpenpic.twitter.com/bIEAGS4D9P

Awaiting Sharapova in the second round is either Varvara Lepchenko or 14th seed Anastasija Sevastova.

Sharapova did not waste any time, outclassing her German opponent to claim the opening break in the second game for an early 2-0 lead.

Her trademark grunt was back on Margaret Court Arena but she was broken back immediately - the Russian star spraying a forehand well wide.

It was the only blip in an otherwise routine set for Sharapova, who reclaimed the break in the next game before earning more success on Maria's serve after the German double-faulted to hand the 30-year-old a 5-1 lead.

Maria, though, refused to surrender despite spending much of the match well behind the baseline as she broke to love in the fourth game for a surprising 3-1 advantage.

That appeared to knock Sharapova off her stride, but only momentarily, surviving a wobble by reeling off four successive games to reach the next round, sealing her win with an ace.