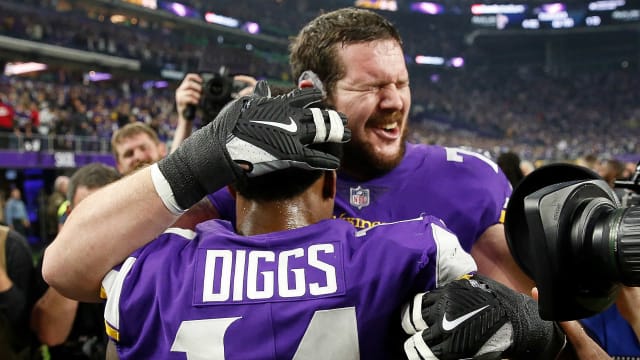 Everson Griffen was happy and then he was sad and then came the "Oh my God" moment.

That was how the Vikings defensive end described the final moments of Minnesota's 29-24 win over the New Orleans Saints in Sunday's NFC divisional playoff game at U.S. Bank Stadium.

In a game that had four lead changes in the final three minutes, the Vikings secured a trip to next Sunday's NFC championship game when Stefon Diggs raced 61 yards as time expired for the game-winning touchdown.

"Fourteen seconds to go, our last play, third down. That's unbelievable," he continued. "You can't draw that up. You can't wish that. It just happened. Oh my goodness.

"I'm lost for words. I've never been part of something like that."

Griffen said it was a "hell of a catch and throw" by Diggs and quarterback Case Keenum.

"This game was over, but I don't stop playing until the clock reaches zero," Diggs, who finished with six catches for 137 yards, told Fox Sports.

Keenum was still stunned after the game, saying he "couldn't believe what was happening".

"I don't know what happened either!"#BringItHomepic.twitter.com/KMoCKGJfz3

Diggs said he received the game ball and called his team-mates "a group of fighters". After he scored, he was mobbed by team-mates and had a hard time breathing with some of the heavier Vikings laying on him.

"Wow, that was a heck of a game, wasn't it? And the good guys won," Vikings coach Mike Zimmer said. "Honestly, I don't know what to say. It was an unbelievable game."

While Diggs admitted the Vikings had never practiced that exact situation, the scenario was something they had worked on every week. The sideline throw was intended for Diggs to catch the ball and get out of bounds to set up a potential game-winning field goal. When Saints safety Marcus Williams missed Diggs, the third-year receiver was allowed to race untouched to the end zone.

Zimmer did not actually see Diggs cross the goal line. His first reaction was to yell for Diggs to get out of bounds. He then checked to see if there were any flags before his eyes turned to the clock. From there, it was mayhem as the celebration began.

"Some guys jumped on me," the coach said. "I don't know exactly what happened."

The Vikings will revel in the win for the next 24 hours, but then it is back to work.

"I've got squats," Diggs quipped when asked about his Monday plans.