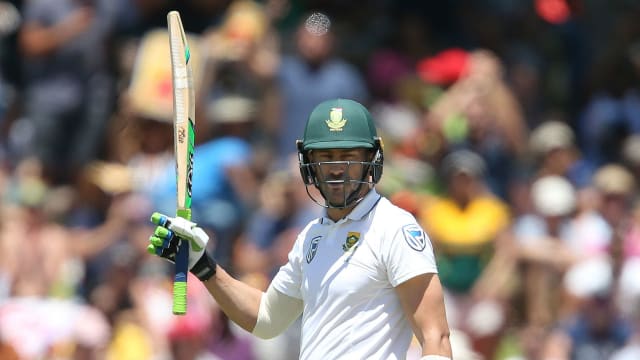 South Africa captain Faf du Plessis is hoping for pace and bounce from the Centurion wicket in the second Test against India, but an "unknown" pitch makes him wary.

The Proteas claimed a 72-run victory in the opening match in Cape Town and are aiming to become the first side to defeat India in a Test series since Australia in 2014-15.

Du Plessis wants South Africa's pacemen to be able to put the tourists under pressure, but finds himself facing unfamiliar conditions on his home surface.

"Generally, Centurion does not spin that much but there is a thick layer of brown grass on it and it is not something that we are used to here. For us, at the moment, it is unknown and we will see how it plays over the next five days," he told a news conference.

"Conditions that we like are when we get the ball that spins as little as possible. The wicket looks a bit browner than I thought.

"What I got from the groundsman is that the grass on the wicket has been burned from the heat over the last week, because it was too hot."

This is what you get when you become the nr 1 fast bowler in the world ,a massive . Well done @rabada_25 .You deserve it champion

Virat Kohli confirmed India are considering altering their opening combination for the second Test and Du Plessis is expecting a "huge performance" from them.

He said: "I think at times they played very good cricket in that first Test. I said that match was one of the best I played in because there were so many ups and downs for both teams.

"India were in the game for 90 per cent of the match. I expect them to take positives out of that game.

"The only part where we were a little better than them was that we got a few more runs in the first innings. I expect another huge performance from them."