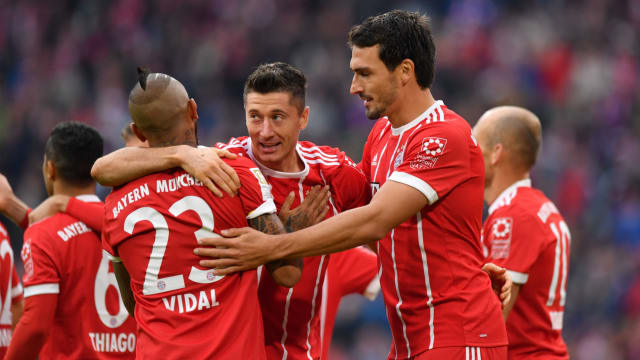 Both players sustained problems during Germany's mid-season break, with Lewandowski suffering with a knee issue and Hummels injuring an adductor.

The pair were forced to train alone for much of Bayern's training camp in Doha, before returning to the rest of the group on Thursday.

However, Friday's trip to Leverkusen has come too soon for them, with Heynckes revealing they will definitely miss out.

"I am happy that both have trained partly with the team and both feel well," Heynckes said at his pre-match news conference.

"We will be able to increase their training schedule from next Monday, but it would be negligent to let them play. That's why both are not part of the squad."

There is good news regarding Joshua Kimmich, who has been deemed ready to at least be selected in the travelling party, even if there are still some doubts about his fitness following an illness.

#Heynckes: "Joshua #Kimmich will be in the squad against @bayer04_en, but it's not clear whether or not he will start." #B04FCBpic.twitter.com/idlJtHXd05

"Joshua Kimmich will travel with the team, but I have to think about if he will start," Heynckes added.

Lewandowski's absence means Sandro Wagner is likely to be handed his first start in his second spell for the club, having joined from Hoffenheim at the start of January for a figure reported to be in the region of EUR12million.

Heynckes expects the Germany international to fit seamlessly into their system.

#Heynckes on #Wagner: "Sandro has settled in well. He is very disciplined and has impressed in training. I'm very happy with him and he is the first option up front tomorrow." #B04FCBpic.twitter.com/zdZVM5N50q

"I don't think it changes that much [about how they play]," the Bayern boss said. "He [Wagner] is also a player who can play with his back to the opponent and make balls, like Lewy [Lewandowski].

"He has settled in well so far. He's very disciplined and impressed me in Doha. I'm happy and he'll be the first option in attack."

Bayern can open up a 14-point lead - at least temporarily - with victory in Leverkusen, but their fourth-placed hosts possess a number of particularly threatening players, with Heynckes highlighting Leon Bailey, Julian Brandt and Kai Havertz.

Heynckes said: "Leon Bailey has made good progress and is scoring goals and Julian Brandt is a talented player.

"But it's not only the two of them; Kai Havertz is also an outstanding talent, their defence is strong. Leverkusen are a convincing team. They've gone 12 Bundesliga games without defeat.

"They're a young, highly talented, hungry, fast-paced team that also has a lot of imagination. It's a game with all the ingredients that make football so attractive, and both teams can play football very well. It's going to be difficult."