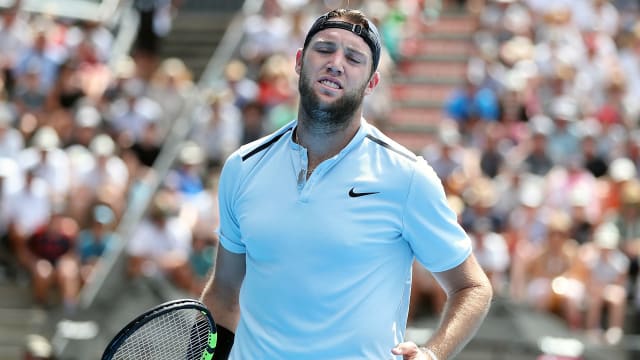 Jack Sock started his season with a shock defeat to Peter Gojowczyk in the Auckland Open, but Juan Martin del Potro hit the ground running to reach the quarter-finals.

Sock produced a stunning surge to qualify for the ATP World Tour Finals last year, but the American's first match of 2018 did not go to plan.

The top seed was beaten 6-3 6-3 by the 65-ranked German Gojowczyk, who won 88 per cent of points on his first serve and broke four times to move into the last eight.

The Argentinean was crowned champion the last time he played in Auckland nine years ago and made only 11 unforced errors in a positive start to his campaign, advancing despite hitting only six winners to gain revenge for a Canadian Open loss to the teenager last year.

He came, he saw, he conquered. @delpotrojuan takes his revenge on Denis Shapovalov in straight sets. #ASBClassicpic.twitter.com/nQ7BgW2vkm

Sock's compatriot Sam Querrey also tumbled out, Jiri Vesely beating the third seed 6-4 6-7 (10-12) 7-6 (7-5) on Wednesday, while John Isner was another American seed to suffer defeat at the hands of Hyeon Chung.

Four-time champion David Ferrer advanced with a 6-2 6-2 win over Joao Sousa, while Robin Haase also made it through.

Ramos-Vinolas lost to Guido Pella in his first match of the season at the Qatar Open and was treated for a leg injury in the second set before bowing out in Sydney after being given a first-round bye.