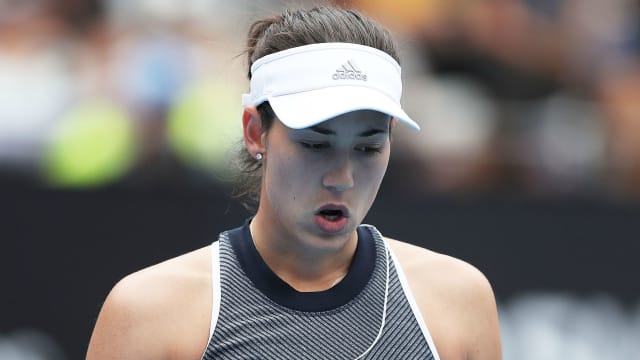 Garbine Muguruza withdrew due to a thigh injury after beating Kiki Bertens before Daria Gavrilova saw off compatriot Sam Stosur to reach the semi-finals of the Sydney International.

Muguruza pulled out of the Brisbane International last week suffering from cramps and the Wimbledon champion had another setback just five days before the Australian Open starts.

The top seed, given a wildcard to play in Sydney, claimed her first win of the season on Wednesday, defeating Bertens 6-3 7-6 (8-6), but later revealed she would not play in the quarter-finals.

"I am disappointed but I have talked to the WTA doctors and my team after the match today and following their recommendation, I have to withdraw from the tournament," she said in a statement.

"I have felt pain in my right adductor since I started practicing here. Yesterday I felt better and wanted to play. However, during the match today the pain has been there all the time but I wanted to compete. I want to thank the tournament and the fans in Sydney for their support."

The Spaniard would have faced Gavrilova in the last eight, but the Australian got a walkover following a 6-4 6-2 win over Stosur under the lights at Ken Rosewall Arena.

Stosur led 3-1 in the first set, but that proved to be a false dawn, Gavrilova warming to the task and taking charged by winning 10 of the next 11 games before going on to oust her friend.

The Belarusian teenager reached the last eight for the second successive week by overpowering Zhang and will now take on fifth seed Lesia Tsurenko.

Alison Riske went through after Kirsten Flipkens withdrew due to a shoulder injury, while Heather Watson and Monica Niculescu were also winners on day four of the tournament.