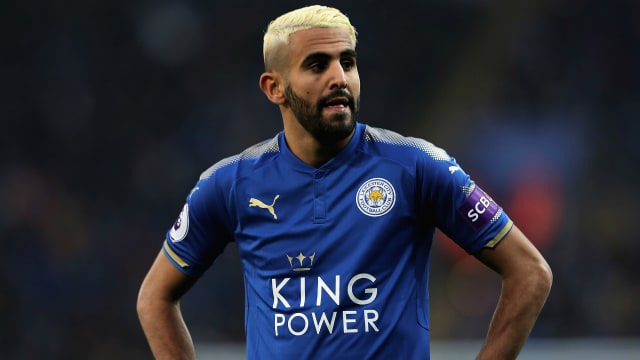 Leicester City boss Clause Puel hopes to keep both Riyad Mahrez and Islam Slimani until at least the end of the season.

Winger Mahrez has been linked with a possible move to Liverpool to replace Philippe Coutinho, who has joined Barcelona for a fee that reportedly could reach £142million.

Club-record signing Slimani, who is said to have cost close to £28m after agreeing to leave Sporting CP in 2016, has managed only two Premier League starts this season and cut a frustrated figure in Saturday's 0-0 FA Cup draw with Fleetwood Town.

However, Puel says the 29-year-old still has a role to play at the club, telling reporters: "This period is always a difficult period with speculation about different players.

"I am happy with Slim. We have a lot of strikers and offensive players and we need to have good balance to give them game time."

Asked about Mahrez, Puel replied: "I am happy with him and I think he is enjoying his football. He is happy to play with this team.

"We are trying to develop good play on the floor and he likes this. He has good results with assists and goals in recent games.

"I think it is important he keeps this focus and concentration until the end of the season."

One player who could leave Leicester in the transfer window is Ahmed Musa, whose sole appearance thus far in 2017-18 came in August as he netted in a 4-1 win over Sheffield United in the EFL Cup second round.

"We will see. Perhaps it could be a possibility. We will see with the player and the opportunity for the club also," Puel said of the forward, who joined from CSKA Moscow in July 2016.

"I need to have discussions about some players."