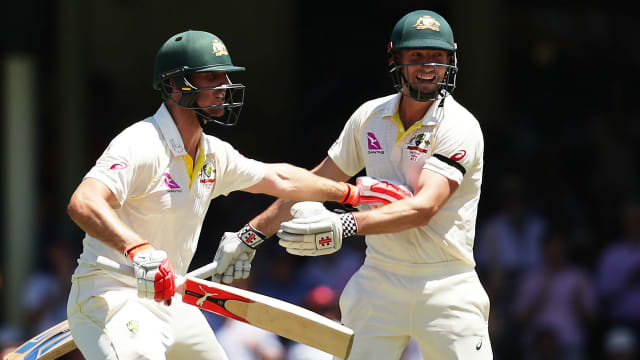 Mitchell Marsh spoke of his relief after brotherly love almost cost him a second Test century on day four of the final Ashes Test at the SCG.

The all-rounder made 101 and his older sibling Shaun a magnificent 156 on a searing hot Sunday in Sydney, where Australia racked up 649-7 declared and England were facing a 4-0 series defeat after being reduced to 93-4 at stumps.

It was a dream day for the Marsh brothers, but they might have been enduring nightmares after celebrating Mitchell's hundred somewhat prematurely.

Shaun went to embrace Mitchell mid-pitch when they went through for a second run to bring up the younger brother's hundred, putting him in danger of a run out as alarmed captain Steve Smith held his head on the balcony.

But a potential family feud was avoided, leaving the two to reflect on a day they could not have scripted.

Another celebration for the Marsh brothers, but Mitch had to remind Shaun to get back in his crease  #MagellanMilestonespic.twitter.com/kEBdGpGGH8

"That was my fault, I think emotions got the better of me and I sort of, just wanted to give him a hug," Shaun Marsh said.

"I saw him starting to celebrate and lost all concept of where the ball was and what was happening with the ball and he sort of pushed me off and said, 'You'd bet to get to the other end'. Thankfully it all worked out well and I was just very happy for him."

Mitchell, sitting alongside his brother in a media conference, said: "I pretty much went for the high five and Shaun went for the hug and we were somewhere parked in the middle.

"There was a quick split-second of panic and hugged again after that."

Neither brother was expected to feature in the five-match series and Mitchell expressed his delight that they have made the most of their opportunities.

"To be honest I didn't really think I was going to play any part for Australia this summer because of my [shoulder] injury and because of the selection, so it's been a pretty whirlwind month for both of us.

"We're both really happy to be here now and contributing to a winning Australian team."