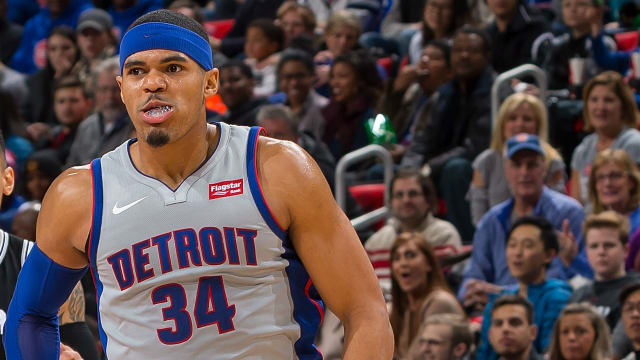 The Detroit Pistons and the Houston Rockets were both short-handed on Saturday, in a matchup between potential playoff teams, but they provided an entertaining contest.

Tobias Harris, an underrated forward, led the Pistons to a 108-101 victory against the slumping Rockets in the NBA by scoring a game-high 27 points with eight rebounds.

Detroit, playing without both Andre Drummond and Reggie Jackson due to injuries, still had six players score at least 10 points.

Ish Smith, normally just a distributor, stepped into the Pistons' starting line-up to score 17 points with four assists and three rebounds. Dwight Buycks came off the bench to score 16 points.

The Rockets, still without MVP-candidate James Harden, have now lost seven of their last nine games.

Chris Paul led the way with 16 points and 13 rebounds, but they lacked their usual offensive bite without Harden.

With the win, the Pistons moved to seventh in the Eastern Conference. The Rockets are still second in the West, but now four games behind the Golden State Warriors.

Warriors star Stephen Curry electrified fans by scoring 45 points on 11-of-21 shooting (eight of 16 from three-point range) with six rebounds, three assists and three steals in a 121-105 win over the Los Angeles Clippers. Curry has now scored at least 29 points in all four games since returning from an ankle injury. He had exactly 29 points by the end of the first half.

BULLS CANNOT BACK UP

Getting trounced 125-86 by the Indiana Pacers is bad enough, but the Chicago Bulls scored just 37 first-half points while finishing the game shooting only 37.5 per cent from the field. Although they played on the second night of a back-to-back, after defeating Dallas on Friday, just four Bulls scored in double figures. No one eclipsed Bobby Portis' 15 points.

Boston Celtics rookie Jayson Tatum comes rampaging through the lane. Tatum scored 14 points in an 87-85 win away to the Brooklyn Nets.

Though his defensive awareness might be an issue at times, Andrew Wiggins can still come up with a bucket in spectacular ways. Wiggins finished with 20 points as the Minnesota Timberwolves defeated the New Orleans Pelicans 116-98.

After the final two wildcard NFL playoff games conclude, sports fans can jump over to the NBA, where two playoff contending Western Conference teams face off in an intriguing matchup. Damian Lillard is back for the Portland Trail Blazers, healthy after a five-game absence. The San Antonio Spurs are nearing full health themselves, with Kawhi Leonard ramping up his minutes.