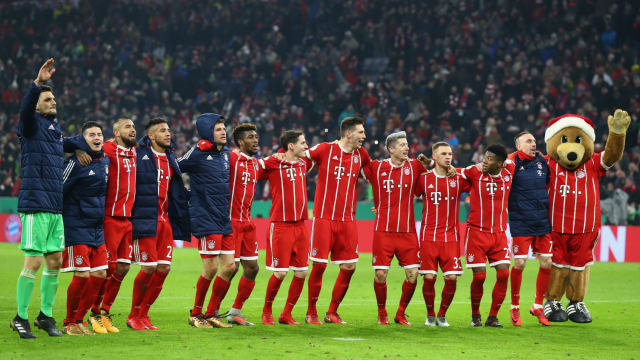 Bayern Munich will play third-tier Paderborn in the quarter-finals of the DFB-Pokal.

Paderborn were among the Bundesliga elite as recently as 2014-15, but suffered consecutive relegations and are now seeking a return to the second division, trailing 3. Liga leaders Magdeburg by just two points.

Steffen Baumgart's side have seen off St Pauli, Bochum and Ingolstadt in this season's competition.

Bayern's run to the last eight has been far tougher, having seen off RB Leipzig and Borussia Dortmund, and they will welcome a trip to the Benteler-Arena, having not lost to lower-league opposition since they were shocked by Alemannia Aachen in February 2004.

Last season's beaten finalists Eintracht Frankfurt will face Mainz in the quarter-finals, While Schalke are set to host Wolfsburg and Werder Bremen will head to Bayer Leverkusen. The ties will be played on February 6 and 7.

And here it is, our quarterfinal draw for the #DFBPokal!

Which tie are you most looking forward to?  pic.twitter.com/tg5QbNUQbx