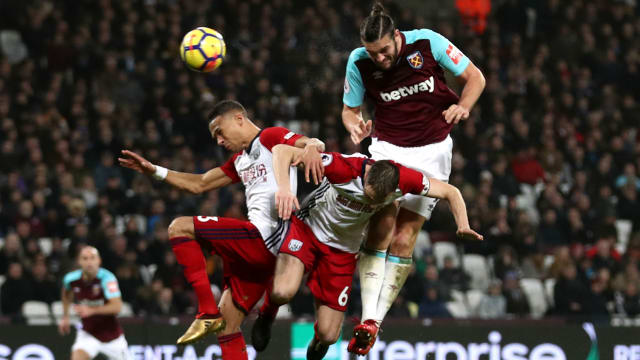 The Hammers had trailed to James McClean's opener in the first half but Carroll levelled with a fine header in the second period before snatching all three points with practically the last kick.

The result means the Baggies have gone 20 Premier League games without victory since their 1-0 triumph at Burnley in mid August, while Alan Pardew has failed to pick up maximum points in his eight matches since succeeding Tony Pulis.

They remain mired in the bottom three while the Hammers, who have endured their own struggles since changing managers earlier in the season, move out of the relegation zone up to 16th.

McCLean's opener owed much to a sizeable slice of fortune, his shot looping up off Pedro Obiang to leave Adrian flapping helplessly as it dropped just under the crossbar.

Ben Foster had made two fine saves to deny Manuel Lanzini in the first half but could do nothing about the equaliser as Carroll rose above two defenders in trademark fashion to plant a powerful header into the bottom-right corner.

And Carroll slid the ball home from a tight angle in the final minute of stoppage time to give West Ham just their third win in 10 since David Moyes took over from Slaven Bilic.

Andy Carroll is the hero at London Stadium, netting twice as the Hammers come from a goal down to seal all points#WHUWBApic.twitter.com/HZHZesDzJU

West Brom came into this clash without a first-half goal under Pardew but they went close to breaking that duck in the 13th minute when Salomon Rondon's chip sailed narrowly over.

The Hammers forced Foster into the first real save soon afterwards as Pablo Zabaleta's cross was only cleared as far as Lanzini, whose rasping half-volley from 16 yards stung the palms of the goalkeeper.

McClean shot straight at Adrian by way of a Baggies response but he had more luck on the half-hour when his effort from outside the box deflected heavily off Obiang and flew over the flailing keeper.

Foster pulled off another superb save seven minutes before the break, getting down sharply to his left to again deny Lanzini, who showed tremendous control in bringing down a high ball and working space for himself inside the area.

The Baggies were indebted to their keeper once more as half-time approached, this time reacting to Carroll's knockdown to dive bravely at Cheikhou Kouyate's feet.

Jonny Evans scuffed an excellent chance too close to Adrian in first-half stoppage time and within a minute of the restart Carroll came agonisingly close to a leveller by diverting Marko Arnautovic's cross just over.

The imposing striker was celebrating just before the hour, though, as he met Aaron Cresswell's superb left-wing delivery with a thumping downward header that left Foster motionless.

Pardew's response was to send Hal Robson-Kanu on in place of Jake Livermore, who appeared to become involved in a spat with a supporter sat close to the dugout before departing down the tunnel.

Arnautovic was denied by a sprawling Foster midway through the half before Baggies substitute Oliver Burke raced clear on goal only to delay his shot and allow Angelo Ogbonna to recover and make the block.

Just when it seemed neither side would be able to force a winner, Arnautovic slid a low ball across the six-yard box for Carroll to convert, leaving Pardew with plenty to ponder at the start of a new year.