Sharapova battles back in Shenzhen but Ostapenko shocked 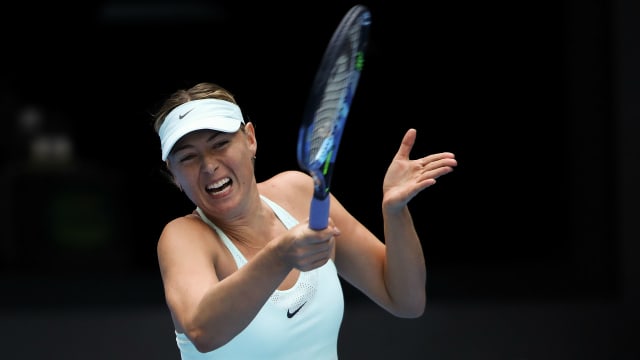 Maria Sharapova fought back from a set and a break down to beat Alison Riske in the second round of the Shenzhen Open, but Jelena Ostapenko suffered a shock loss.

Sharapova breezed past Mihaela Buzarnescu in her opening match but found American Riske a much trickier opponent.

Riske took the opening set with a lone break of serve and then appeared on course for victory in the second, only for Sharapova to battle to a decider, which she subsequently raced away with, winning 4-6 6-3 6-2.

A clear indicator of the challenge Sharapova would face came in the opening game when she was broken by Riske, who saved three break points en route to taking the set.

She then broke to love in the third game of the second, only for Sharapova to win five of the next six games, staving off four break points in the process, to take the contest to a third set.

And the key moment in that decider came as an errant Riske volley saw a third successive break go the way of Sharapova.

The five-time grand slam champion gave a break straight back, but then went on to win the next four games to prevail, wrapping up victory with an unreturnable serve.

"I'm glad I got this kind of match. Sometimes these are the matches that you need. I'm glad I came back, I thought it was a great quality match," Sharapova, who plays Zarina Diyas - victor over Zhang Shuai - in the last eight, said on court.

But there was disappointment for French Open champion and second seed Ostapenko, who suffered a 6-1 6-4 defeat to Kristyna Pliskova in the first round.

Pliskova raced into a 5-0 lead before taking the first set and got the better of a second that featured five breaks to claim a second top-10 win and set up a second-round meeting with Ana Bogdan, who beat Camila Giorgi in straight sets.

"My goal is, like last year, to break into the Top 20. Hopefully I can make it this year," Pliskova said.

Teenager Aryna Sabalenka, who lost to Sharapova when the Russian clinched her first title since her anti-doping rule violation ban at the Tianjin Open in October, defeated Danka Kovinic to stay on course for a possible reunion in the Shenzhen showpiece.