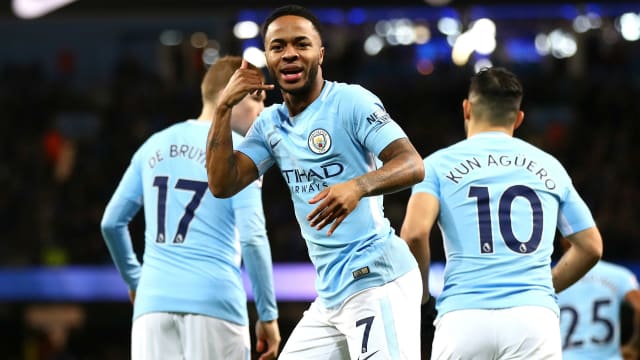 Raheem Sterling scored the fastest Premier League goal of the season to help Manchester City to a 3-1 win over Watford at the Etihad Stadium on Tuesday.

The England international netted after only 39 seconds, before a Christian Kabasele own goal and a second-half finish from Sergio Aguero saw Pep Guardiola's side move 15 points clear at the top of the Premier League, with Andre Gray's late effort counting for little.

City's record 18-game winning run came to an end in a goalless draw at Crystal Palace on New Year's Eve and Guardiola took no chances with his line-up, with Kevin De Bruyne - passed fit after being hurt at Selhurst Park - joined by the returning David Silva in midfield, while John Stones made his first appearance since November at the heart of the defence.

Watford were looking for a response to their dramatic defeat to Swansea City but some slack defending in the first minute saw them fall behind and they rarely threatened a comeback from then on.

Kabesele's unfortunate own goal sapped the morale from the visitors, who have now lost six of their last seven league games, and the encounter turned into little more than a training exercise for the home side, with Aguero scoring his 13th top-flight goal of the season midway through the second half before Gray's consolation.

The result means Chelsea must beat Arsenal on Wednesday if they are to cut the gap to City to 14 points, while Watford, though in 10th place, are only five points above the relegation zone thanks to West Ham's win over West Brom.

13 - Christian Kabasele is just the seventh player in Premier League history to score an own goal in the 13th minute of a game. Unlucky. pic.twitter.com/nFAD6FyyY1

Watford lost to Swansea last time out after a collapse in the closing moments and they picked up where they left off against City,  falling behind in the first minute.

Leroy Sane got away from Daryl Janmaat down the left and crossed for Sterling, who tapped home completely unmarked at the far post from six yards out.

The home side should have doubled their lead with only five minutes played, as Sane again made space on the left and teed up Stones, only for the centre-back to blast over with the goal gaping.

But they were gifted a second in the 13th minute when Kabesele slid to intercept De Bruyne's low cross from the right and sent the ball spinning into the left-hand corner of the net.

De Bruyne was showing no signs of the injury inflicted by Jason Puncheon in the draw with Palace and he was inches away from making it 3-0 to City when his free-kick from the edge of the box crashed off the crossbar, with Heurelho Gomes having got fingertips to the ball.

Watford displayed some positives before the interval, though, and it took a fine save from Ederson to deny Janmaat one-on-one after the visitors broke through City's high line, before the Brazilian saved again from Andre Carrillo.

City, who had dropped to something of a pedestrian pace, looked eager to kill off any rising Watford hope of a comeback and Aguero wasted three decent openings from inside the penalty area, firing straight at Gomes before twice miscuing headers.

However, in the 63rd minute, Gomes spilled a low cross right to the feet of Aguero, who could not miss the open goal from inside the six-yard box as the Watford keeper lay helpless on the sodden turf.

Gray steered home Carrillo's cut-back with eight minutes left to give City a minor headache and Nicolas Otamendi was fortunate not to concede a penalty for tripping substitute Jerome Sinclair, but they now switch their focus to the domestic cups, with an FA Cup third-round clash at home to Burnley on Saturday followed by next Tuesday's visit of Bristol City in the first leg of the EFL Cup semi-final.