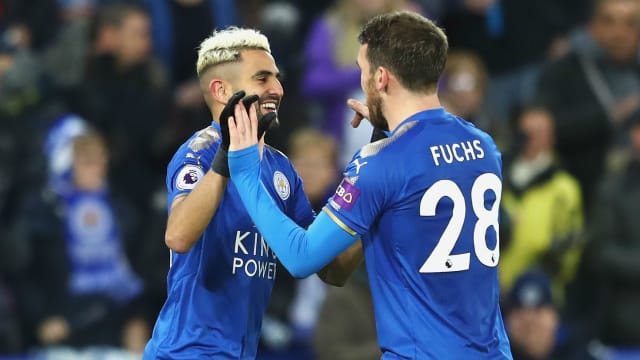 Two instances of individual brilliance from Riyad Mahrez and Islam Slimani helped Leicester City to a 3-0 win over Huddersfield Town at the King Power Stadium on Monday, ending the hosts' four-match winless run.

Leicester struggled over the festive period and went into 2018 on the back of successive league defeats, but Mahrez and Slimani scored excellent goals early in the second half to stop the rot in their first New Year's Day home game since 2013, when they beat Huddersfield 6-1 in the Championship.

Marc Albrighton, who provided the assist for Mahrez's opener, added a third late on, after Adrien Silva had been introduced for his belated Leicester debut.

A scrappy first half provided little entertainment for either set of supporters, but it was a completely different story after the break as two moments of high class sent Leicester on their way to what ultimately proved a straightforward win.

7 - Riyad Mahrez has scored seven goals in 22 Premier League appearances this season, one more than he netted in 36 games in 2016-17. Reboot. pic.twitter.com/Ocor50Z53d

Mahrez got the first with a sublime volley, before then setting up Slimani - making his first Premier League start since September due to Jamie Vardy's groin injury - for a fine goal of his own.

Leicester appeared understandably reluctant to push men forward towards the end, but David Wagner's men simply failed to break them down and conceded a third in injury-time.

There was a lack of quality on display in the early stages, with Huddersfield happy to sit back and Leicester failing to apply pressure.

Huddersfield did threaten in the 20th minute thanks to a simple long ball down the middle of the pitch, but Danny Williams was barged over by Harry Maguire just outside the box when he looked to be in on goal, and no free-kick was awarded.

That perceived injustice seemed to fire Huddersfield up and they went close to the opener shortly after - Williams racing on to Steve Mounie's cut-back on the edge of the area and sending a first-time effort wide of the bottom-left corner.

Leicester suffered a blow just before the half-hour mark as captain Wes Morgan was forced off through injury, though they nearly broke the deadlock a few moments later, Slimani putting an effort wide from 12 yards after a scramble in the area.

Puel's men began the second half with renewed focus and went close soon after the restart, with Slimani sending a header from Daniel Amartey's cross into the hands of Jonas Lossl.

The Huddersfield goalkeeper was helpless in the 53rd minute, though, as Albrighton picked out Mahrez on the right side of the area and he opened his body up before producing a cushioned volley into the bottom-left corner.

Mahrez then turned provider after an hour, slipping a pass into the Huddersfield half on the counter-attack for Slimani to run on to. The striker charged clear before chipping Lossl with an exquisite finish.

Wilfred Ndidi almost added a third seven minutes from time when he headed against the crossbar, but Huddersfield were not so lucky at the death when Albrighton smashed in from close range to round off an easy win for Leicester, who also gave Silva his belated debut as a substitute late on.

Huge round of applause from the crowd for the new man on his debut as well as a standout performance from James, who he replaces.