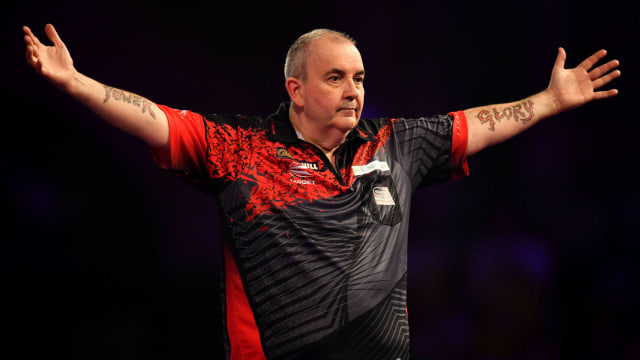 Phil Taylor said he was comfortable with his decision to retire after failing to crown his illustrious career with a fairytale finale at the PDC World Darts Championship.

Seeking a 17th world title in his final year on the professional circuit, Taylor was sensationally beaten 7-2 by tournament debutant Rob Cross, who only turned professional at the start of 2017.

The relentless Cross recorded a stunning average of 107.67 and hit 60 per cent of the doubles he targeted, taking out checkouts of 167, 153 and a match-clinching 140 in a remarkable, nerveless display.

It was not the end Taylor and his fans had hoped for, but the 57-year-old feels the result showed it is the right time to bring an end to the most successful career in darting history.

"I tried my best but he [Cross] was like me 25 years ago, he was good, we was relentless and didn't stop putting me under pressure, the way I used to be, he is a lot like myself," Taylor said on Sky Sports.

"He's dedicated, he's listened, learned and the players next year have got a big problem. You've got someone who wants to win.

"I don't think the money with him is going to make a scrap of difference, you've got a little animal on your hands. He's got that grit in his teeth.

"It was like an old man against a young man, it was a mis-match. I'm pleased that's the end for me because I haven't got the energy or interest to beat Michael van Gerwen, Adrian Lewis or him [Cross] anymore.

"It's been marvellous, I've had a fantastic career but I can't compete anymore more. Barry [Hearn, the PDC chairman] would love me to but I can't do it anymore."

An incredible career comes to an end...

The greatest player to ever throw a dart. #LoveTheDarts pic.twitter.com/KFYTnijO6T

Cross' victory on Sunday completed a meteoric rise for a player who was making his debut at Alexandra Palace having worked as an electrician as recently as a year ago.

His calmness when victory came into view added to an impressive display, while Cross was also happy for Taylor to share the limelight as the duo lifted the trophy.

"I feel great but it's Phil's last year and it's about him departing," said the newly crowned champion.

"That's why I let him lift the trophy. He's phenomenal.

"It was my dream to play him 15 years ago and now I have. I was actually born in 1990 when he won his first title, he won the trophy and I took my first breath!