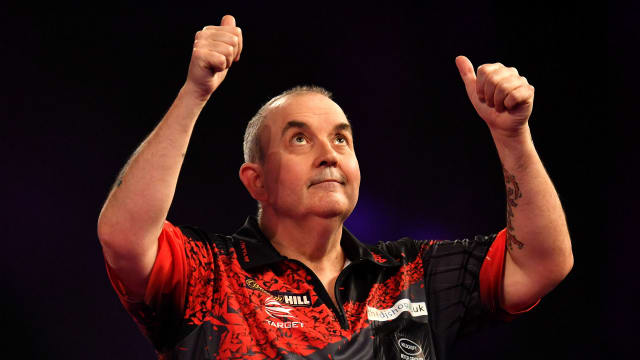 Retiring oche icon Phil 'The Power' Taylor has played down his chances of crowning his "greatest achievement of all" by beating Rob Cross in New Year's Day's World Darts Championship final.

Taylor will bring the curtain down on his career at the Alexandra Palace on Monday, as he looks to add a 17th world title to his record haul against the exciting new name in darts.

With Taylor set to depart, Cross has been backed to fill his shoes, having reached the world final at the end of his first year as a professional.

Cross beat top seed Michael van Gerwen in a sudden-death semi-final on Saturday and Taylor admits a tournament of shocks and upsets has fallen into his lap.

ONE OF THE GREATEST MATCHES YOU WILL EVER SEE

Rob Cross is into the World Championship final against Phil Taylor after a truly incredible game against world number one, Michael van Gerwen

Thank you Michael and Rob for a wonderful match #WHdarts#LoveTheDartspic.twitter.com/1tiz3hSGEG

He said: "At face value, getting to a world championship final at 57 is my greatest achievement of all. But, when you look at what's happened over the past two weeks, maybe I've just been lucky.

"All the big seeds have fallen by the wayside, and now Michael has gone, too.

"Let's be honest: I'm not the best player in the tournament. I'm too old and too tired now. I've just been picking up the pieces and capitalising on other people's mistakes.

"My opponents have been under a bit of pressure because they know it's my last tournament and don't want to be the bad guy who sends me packing.

"Can I tell you a secret? I've never really believed I can win this tournament. And I still don't think I'm going to win it - but I am going to enjoy it."

PHIL TAYLOR IS INTO THE FINAL!

Is it destiny here at Ally Pally? Phil Taylor beats Jamie Lewis 6-1 to book his place in the final.

Will it be World Title 17 for The Power? pic.twitter.com/YgOPWPgdvx

Cross held his nerve to defeat an off-colour Van Gerwen, and his remarkable rise to prominence was laid bare by a pre-match anecdote regarding his opponent.

Cross said: "I have never played Phil before, but I have written my own book over the last year, so why can't I write it again?

"The first time I spoke to him was at the Grand Slam six weeks ago and I got my photo taken with him. It sounds sad now, doesn't it?

"But he did say, 'You and me in the final at the world championship, bud' - he must be Mystic Meg.

"I've watched Phil play on TV since I was about 12 and I fell in love with darts. He is an inspiration, and now I am going to be playing an inspiration in the final so I need to be inspired."