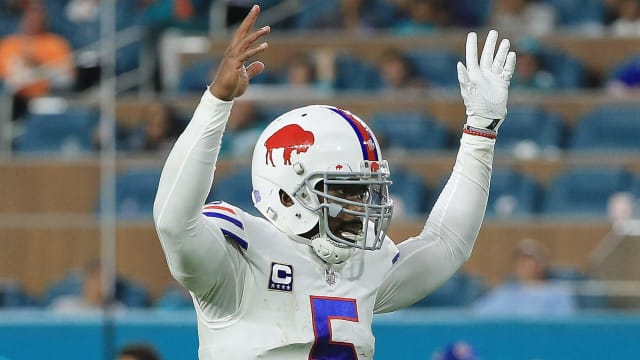 The NFL's longest postseason drought is over after the Buffalo Bills reached the playoffs.

The Bills are in the playoffs for the first time since 1999 after they beat the Dolphins and got the help they needed. Buffalo's 22-16 victory in Miami was coupled with a Bengals win over the Ravens.

The Bills (9-7) are the number six seed with the Titans (9-7) getting in with their 15-10 win over the Jaguars in Nashville. The Chargers (9-7) did their part to make the playoffs by clobbering the Raiders, but they needed the Ravens and Jaguars (10-6) to both win.

While the Jaguars were locked into the three seed in the AFC, the number one seed was undecided. The Patriots (13-3) clinched home-field advantage throughout the AFC playoffs with a 26-6 win over the Jets. Because of New England's win, the Steelers (13-3) were unable to grab the top seed despite a 28-24 win over the Browns to ensure a winless season for Cleveland. The Chiefs (10-6), who clinched the AFC West and the number four seed last week, ended the regular season on a high note with a 27-24 victory over the Broncos.

While there were two playoff spots up for grabs in the AFC, the Seahawks and Falcons were battling for the final spot in the NFC. That spot went to the Falcons (10-6) after their 22-10 win over the Panthers. Even if the Falcons had lost, they still would have grabbed the number six seed because the Seahawks (9-7) were dealt a 26-24 home loss by the Cardinals (8-8), who managed to avoid a losing season in what might be the final campaign for head coach Bruce Arians.

The Panthers (11-5) lost out on an opportunity to move up to the number two seed even before their game in Atlanta. The Vikings (13-3) sealed the second seed in the NFC with a 23-10 win over the Bears. Carolina slip to the number five seed and will play the Saints (11-5) in next week's wild-card game. The Saints will host that game after winning the NFC South despite a 31-24 loss to the Buccaneers. The Falcons will head to Los Angeles to play the Rams, who rested several starters in a 34-13 loss to the 49ers.

The 2017 playoff field is set and the postseason begins on Saturday.

Colts running back Frank Gore ran for 100 yards in Sunday's win over the Texans to become the fifth running back in NFL history with at least 14,000 rushing yards.

Raiders running back Marshawn Lynch ran for 101 yards in the loss to the Chargers to push him past 10,000 yards for his career.

Steelers rookie JuJu Smith-Schuster helped keep the Browns winless with a 96-yard kickoff return that was ultimately the game-winning score.

JUJU ON THAT KICK RETURN!

Seahawks receiver Tyler Lockett also took a kickoff to the house, going 99 yards against the Cardinals.

Not to be outdone, Saints running back Alvin Kamara added his first career kickoff return for a score with a 106-yard return in the first quarter of Sunday's 31-24 loss in Tampa.

Chiefs rookie Kareem Hunt had just one carry in the 27-24 win over the Broncos, but it was enough to become the season's rushing champ. His 35-yard run in the first quarter pushed him past Rams running back Todd Gurley, who did not play Sunday.

James Harrison's Patriots debut was a success. The former Steelers defensive end had a pair of sacks in New England's 26-6 win.

Chargers receiver Travis Benjamin caught four passes for 96 yards, including a 62-yard strike from Philip Rivers in the 30-10 win over the Raiders.

The Seahawks rallied to take a late lead on the Cardinals with a Russell Wilson touchdown pass to Doug Baldwin.

Hue Jackson on going 1-31 in two seasons as the Browns coach: "I don't think anyone else could've done this job for the past two years."

Lions coach Jim Caldwell on his job security: "If there was something changed, I wouldn't be standing here. Right? Still working... The real assessment is wins and losses. That's the key. I think there are things that I've done, but I'm not done yet. So you know, we'll see."