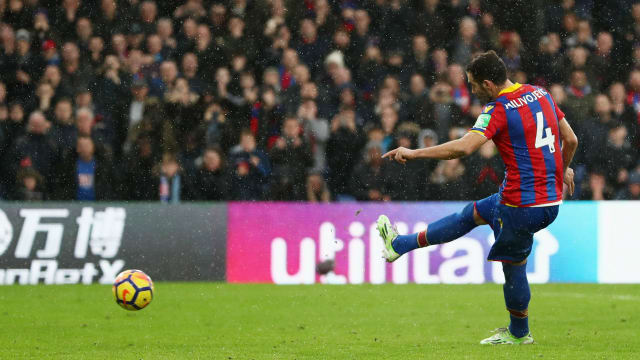 Luka Milivojevic had a stoppage-time penalty saved as Crystal Palace missed the chance to halt Manchester City's unbeaten start to the season, although the Premier League leaders' winning run has been stopped at 18 following the goalless draw at Selhurst Park.

Pep Guardiola's men went into the match one win away from equalling the record for successive wins in Europe's top five leagues - set by the Catalan's Bayern Munich side - but they were ultimately frustrated by a well-drilled Palace side who were only denied all three points by Ederson's heroics at the end.

City showed two sides to their game in the first half, as they created a few good chances with some expansive football - Bernardo Silva and Sergio Aguero going particularly close, with the latter introduced midway through the half for the injured Gabriel Jesus.

But there was also palpable frustration on show, with Kevin De Bruyne and Leroy Sane, who was booked for petulantly kicking the ball away at the end of a poor first half, involved in a verbal disagreement at one point.

City appeared more switched on again after Raheem Sterling's introduction from the bench in the 57th minute, adding a little extra spark to their attacks and setting Sane up for a great chance.

But it was Palace who came closest to clinching the win following a Sterling foul on Wilfried Zaha, but Ederson was equal to Milivojevic's effort from the spot, leaving City 14 points clear of Chelsea.