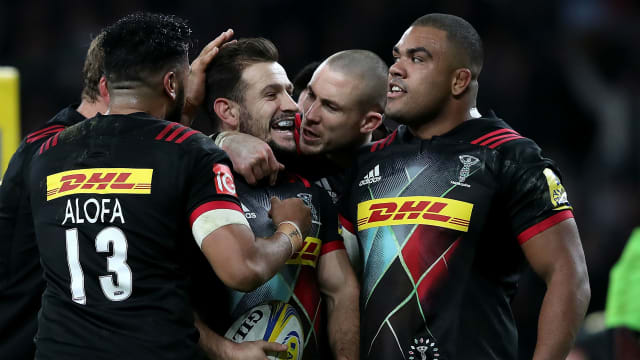 Danny Care and Tim Visser claimed doubles as Harlequins inflicted a 50-21 drubbing on beleaguered Northampton Saints at Twickenham and Saracens made it back-to-back Premiership wins at the expense of Worcester Warriors on Saturday.

Saints this week installed Alan Gaffney as interim director of rugby until the end of the season and the Australian watched his side slump to a 12th defeat in 13 games after a pitiful first-half showing in front of a crowd of 77,825.

Sarries hammered Saints 55-24 on the opening day of the season and the Northampton club suffered another mauling in their final game of 2017, rampant Quins taking advantage of meek defending to score seven tries.

Visser and Care added further tries to secure the bonus point, Saints looking shell-shocked as they went into the break trailing 31-0 after being torn apart all too easily.

The excellent Smith tossed a long pass for Visser to add another five-pointer early in the second half and England scrum-half Care touched down again after Rob Horne and Nic Groom went over in quick succession, Saints finally showing some spirit in a lost cause.

Mikey Haywood scored a third Northampton try after Mat Luamanu went over at the other end, while Smith finished with 15 points with England head coach Eddie Jones in the stands to witness another difficult day for his captain Dylan Hartley.

Second-bottom Worcester were unable to pull off a shock victory which would have moved them above Northampton as Sarries sealed a six-try 46-31 at Allianz Park.

Jackson Wray and Nathan Earle scored two tries apiece in the second half for the European champions, who followed up a Christmas Eve success over Leicester Tigers - which ended a seven-match losing streak - with another win.

Gloucester occupy fourth spot following a 20-16 home win over Sale Sharks, while Alex Tait helped himself to a brace of tries in Newcastle Falcons' 20-15 victory at bottom side London Irish.