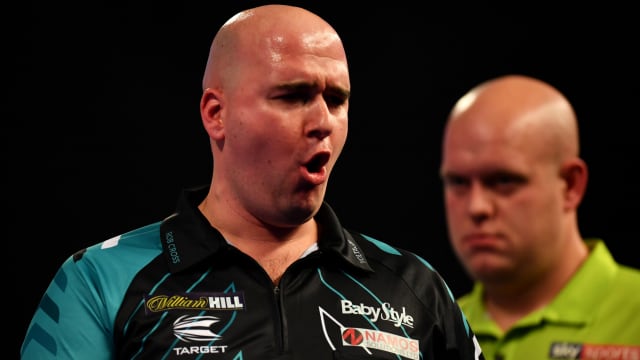 Cross only turned professional at the start of the year but the 27-year-old is now preparing for a New Year's Day final showdown with retiring 16-time world champion Phil Taylor following his memorable 6-5 victory Saturday.

With the Alexandra Palace rocking and behind World Championship debutant Cross amid a chorus of boos for Van Gerwen, the former had numerous chances to claim a stunning upset after leading 4-3 and levelling at 5-5.

Cross forced a sudden-death leg with a 16 and D18 to stay alive after Van Gerwen failed to close it out in tense scenes.

Van Gerwen proved wasteful again, missing a sixth match dart as Cross nailed a D8 to progress to the decider.

"I've written my own book this year," Cross, who will improve to sixth in the world rankings, told Sky Sports. "I actually believe I can keep with Michael every day.

"I feel I can be better than what I am. Rankings don't mean anything until I'm number one."

Rob Cross beats MVG in a sudden death leg to set up a final with Phil 'The Power' Taylor#WHDarts#LoveTheDartspic.twitter.com/WjwokJ0aNa

On his upcoming clash against Taylor, Cross added: "He's my favourite player. He's dominant, but I need to do my own job. I never expected this rise - I'm just a normal working boy."