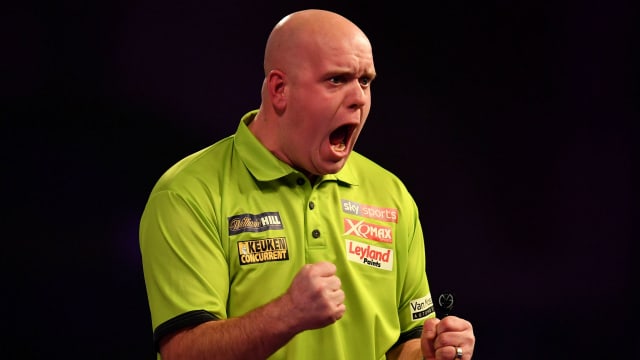 Michael van Gerwen triumphed 5-4 in a pulsating quarter-final against Dutch compatriot Raymond van Barneveld, while the retiring Phil Taylor fended off a Gary Anderson fightback at the PDC World Championship.

In the Dutch derby, Van Barneveld and Van Gerwen - who owned a win apiece over the other at the previous two Worlds - played out an enthralling contest on Friday.

After a scratchy opening, it appeared Van Gerwen would pull away as Van Barneveld wastefully missed three darts on double nine in the third set to allow his opponent to creep ahead.

Van Gerwen dominated the fourth to go ahead 3-1, but in a thrilling fifth he was on for the highest average in a single set at the Worlds only for Van Barneveld to incredibly break back and pinch the set.

A brilliant 121 checkout helped make it a tied match, but Van Gerwen took control again in the seventh.

However, he missed match dart in the following set as Van Barneveld again levelled with a nerveless 86 checkout.

But three missed darts at double 16 in the decider proved costly for Van Barneveld, as Van Gerwen broke for a lead he did not relinquish.

What an INCREDIBLE GAME here at Alexandra Palace!

He is into the Semi-Finals! #MVGvRVB#LoveTheDarts#WHDartspic.twitter.com/P3LnPzF1yJ

Taylor met Anderson in a repeat of the 2015 final, which the Scot won 7-6 in a thriller, and the 16-time world champion raced into a 4-1 lead before holding out for a 5-3 triumph.

"The Power" started in brilliant fashion with a 120 checkout and a 107 average to take the first set and, although Anderson responded to level, Taylor won the third 3-0 - thanks partly to Anderson missing four darts at double in the first leg - before dominating the fourth and fifth.

In typical fashion, Anderson refused to wilt and he took out 110 in the sixth, before recovering from a stunning 126 bull finish from Taylor to move within one.

But in a thrilling final set, Taylor missed two match darts before finally finishing the double with double tops.

Phil Taylor marches on at the Palace!#LoveTheDarts#WHDarts#TAYvANDpic.twitter.com/w4XZkD1Gwv

Jamie Lewis battered Darren Webster 5-0 to set up a meeting with Taylor, while Rob Cross faces Van Gerwen after holding a valiant fightback from Rob Cross to win 5-4.