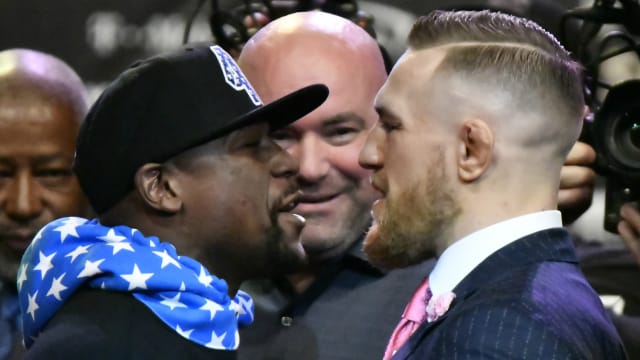 Will undefeated boxer Floyd Mayweather Jr. come out of retirement again to fight in the UFC? Do not rule anything out, according to president Dana White.

As rumours surrounding Mayweather - who overcame UFC champion Conor McGregor in a blockbuster boxing bout in August - and claims he could step into the octagon continue to circulate, White is only adding fuel to that speculation.

In an appearance on ESPN's Undisputed, White stirred up the rumour mill even more while showing optimism that a deal involving the 40-year-old American could come soon.

"Don't count anything out on him coming over to the UFC," White said. "I did not believe that McGregor-Mayweather would happen and it did. So anything is possible."

White also said that he has a meeting with Mayweather's people on Thursday.

The rumours of Mayweather going to UFC began when the boxing great indicated he could fight in the mixed-martial arts arena if he wanted to, but also seemed to backtrack saying he was not going to try MMA in the same interview with FightHype.com.

"Exactly what I said is this: If I could make over a billion dollars before, I could do it again," Mayweather said.

White said just over a week ago that the UFC is very interested in doing something with Mayweather, adding that everything is a realistic possibility.

"We're talking to Floyd about doing a UFC deal," White said, per ESPN.com. "It's real. He was talking about [boxing] McGregor. Was that real? Have you heard Floyd talk about many things that aren't real? He usually tips his hand when he's in the media, and then that s*** ends up happening."