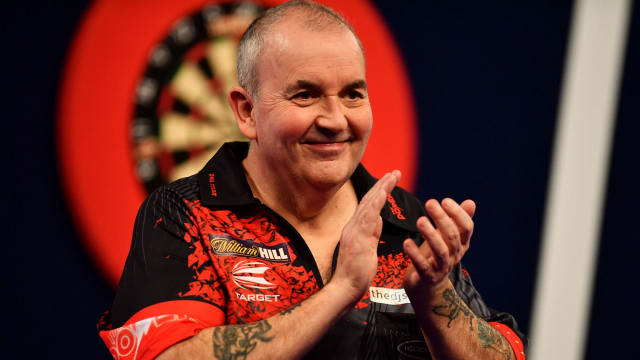 Phil Taylor powered into the quarter-finals of the PDC World Darts Championship on Thursday, setting up a mouth-watering clash with Gary Anderson.

Taylor, a 16-time world champion, will bring his top-level darts career to a close at the end of the competition but made sure of a blockbuster meeting with Anderson in a repeat of the 2015 final, which the Scot won.

'The Power' made light work of third-round opponent Keegan Brown, completing a comfortable 4-0 victory to boost his confidence about claiming a first title since 2013.

"I am starting to believe I can win," Taylor said in an interview posted on the PDC's Twitter account. "Whether I can or not I don't know, but I feel like I can."

Bad news for everyone else....

PHIL TAYLOR NOW BELIEVES HE CAN WIN THIS #WHdarts#LoveTheDartspic.twitter.com/7NmHPsBIDc

Anderson found the going much tougher in his clash with Steve West.

The 47-year-old, last year's runner-up, appeared to be struggling with a back injury and averaged 95.26 while converting just 15 of the 44 checkout opportunities he engineered.

However, Anderson eventually got the job and remains on course to make the final for a fourth year in succession.

Gary Anderson makes hard work of it, and looks to be struggling with a back injury, but is into the Quarter-Finals to face Phil Taylor...#LoveTheDarts#WHDartspic.twitter.com/GHqZceONGc

Meanwhile, Darren 'The Demolition Man' Webster lived up to his moniker by sweeping aside Toni Alcinas 4-0, the 23rd seed setting up a quarter-final clash with Jamie Lewis, who beat James Richardson 4-1.