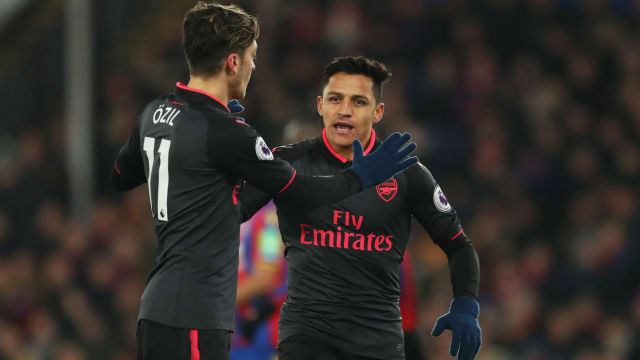 Alexis Sanchez stole the show with a pair of excellent quickfire goals as Arsenal beat Crystal Palace 3-2 at Selhurst Park in Arsene Wenger's record-equalling 810th Premier League match in charge of the club.

For much of the game, Arsenal produced some of the fine football we have grown accustomed to since Wenger's arrival in 1996, and Sanchez produced two moments of real quality in less than four second-half minutes to clinch all three points as the Gunners boss moved level with Alex Ferguson in terms of Premier League fixtures managed.

Although Palace went into the match without a defeat in their previous eight top-flight outings, Arsenal were well in charge for the majority of the first half and were fully deserving of the opening goal through Shkodran Mustafi in the 25th minute.

The visitors failed to make the most of their chances while they were on top, though, and Palace punished them early in the second period - Andros Townsend with the finish after excellent play from Wilfried Zaha.

But that seemed to be the scare Arsenal needed to jolt them back into life, as Sanchez - who will enter the final six months of his contract on January 1 - took over to leave Palace wondering what had hit them.

The Eagles showed desire to get back in the match and pulled one back in the 89th minute through James Tomkins, but they were unable to stop Arsenal cruising to victory and going level with fifth-placed rivals Tottenham on 37 points .

Arsenal looked focused and in control during the early exchanges and produced some neat football which led to chances.

Jack Wilshere, Sanchez and Granit Xhaka had efforts blocked by Palace's robust defending, but their resistance was ended just after the midway point in the opening period.

Alexandre Lacazette forced Julian Speroni into a save from a tight angle on the right side of the area and Mustafi coolly slotted in the rebound.

Palace showed no sign of getting to grips with Arsenal, but they managed to avoid falling further behind before the break - Ozil tried to square to Sanchez when through on goal, only to get it all wrong.

But the hosts were quick out of the blocks in the second half and levelled in the 49th minute.

Zaha beat Calum Chambers with ease and cut a pass back towards the penalty spot, where Townsend arrived to send an emphatic strike into the bottom-left corner.

Arsenal looked unrecognisable to the team that dominated the first period, but a moment of brilliance from Sanchez restored their lead.

Ozil clipped a lofted pass into the left side of the area, which Wilshere nodded down to Lacazette, and the Frenchman teed up Sanchez for a rasping drive into the bottom-left corner.

What a ball from super @JackWilshere!!! #COYG

The Chilean extended Arsenal's lead in the 66th minute, racing on to a sumptuous pass over the Palace defence from Wilshere - who also has just over six months left on his contract - before calmly nudging the ball beyond the stranded Speroni.

Palace piled pressure on towards the end, with Zaha heading a glorious chance wide and substitute Bakary Sako shooting well over from just inside the area.

Tomkins showed them how it was done, heading Townsend's corner in late on to force a nervy finish for the Gunners, who held on to inflict a first defeat on Palace since Tottenham beat them on November 5.