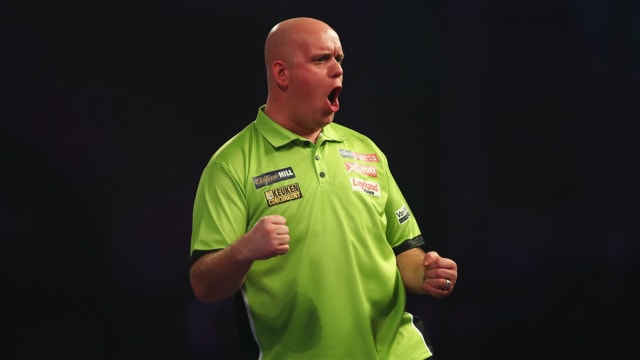 Defending champion Van Gerwen had to overcome a scare in an exhilarating third-round meeting with 16th seed Gerwyn Price, who rallied from 2-0 down and failed with three attempts to nail a double 20 that would have given him the lead.

The Dutchman made the most of the reprieve, closing out the set with his next attempt and marching on to complete a 4-2 triumph.

In a repeat of last year's semi-final, Van Gerwen will take on compatriot Van Barneveld. The 2007 champion booked his place in the last eight by defeating Vincent van der Voort 4-1.

Lewis, who scraped through qualifying to earn a spot in the finals, was in sensational form as he claimed the biggest scalp of his career with a 4-1 victory over second seed Wright.

Wright claimed the opening set but could do little to stop his opponent's surge into the third round, the Welshman recording three successive 12-dart finishes in a stunning display.

Lewis averaged 107.27 and threw 13 180s to send the 2014 runner-up, whose build-up to the tournament was hampered by gallstones, packing.

INTERVIEW | "It felt like I was in a dream up there"

There was a sense of deja vu when Darren Webster beat 10th seed Simon Whitlock 4-1, the Australian having been knocked out by the same opponent in three of the last four years.

James Richardson reached the last 16 for the first time at the expense of Alan Norris, while Toni Alcinas toppled Kevin Munch in the opening session.