Taylor and Van Barneveld storm into third round 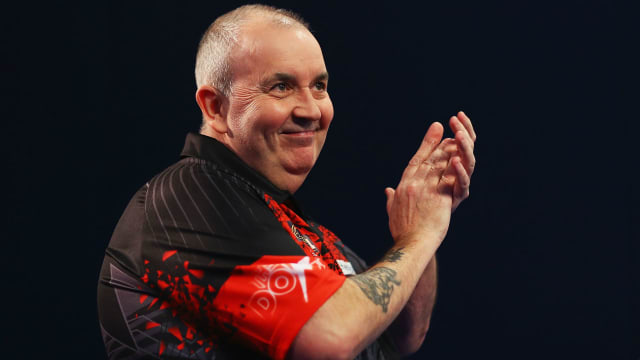 Phil Taylor marched into the third round of the PDC World Darts Championship with a clinical 4-0 defeat of Justin Pipe and Raymond van Barneveld also advanced on Saturday.

Taylor will end his illustrious career after the tournament at Alexandra Palace and remains in contention to sign off in style with a 17th world title.

'The Power' averaged 99 and landed 54 per cent of his doubles in a one-sided second-round match to set up a last-16 meeting with Keegan Brown.

Pipe, booed by the crowd despite denying trying to put Bernie Smith off by coughing when the New Zealander was throwing for the match in the previous round, led 2-1 in the opening set, but Taylor won 11 legs in a row to take complete control.

The legendary Taylor hit a 10-darter in the second set and did not allow Pipe a look-in, easing through at a canter in the evening session.

ON THE BULL | Phil Taylor is running away with this one!#WHdarts#LoveTheDartspic.twitter.com/u9dbo67P7N

Van Barneveld, the five-time world champion, saw off Kyle Anderson 4-1 in the final match before Christmas.

The Dutchman will take on compatriot Vincent van der Voort after outclassing Anderson.

Rob Cross beat Michael Smith 4-3 in an afternoon thriller which was delayed for 20 minutes due to faulty big screens, while Brown and Steve West also made it through.

John Henderson got the better of fourth-seed Daryl Gurney 4-2 in the first match of the evening.