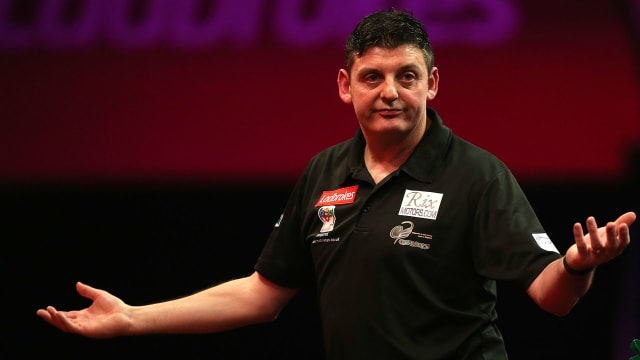 Justin Pipe has denied trying to put Bernie Smith off by coughing when his opponent was throwing for the match after Wayne Mardle accused him of "absolutely despicable behaviour" in the first round of the PDC World Darts Championship.

Pipe came from behind to beat qualifier Smith 3-2 on Wednesday and set up a second-round encounter with the great Phil Taylor at Alexandra Palace.

The Englishman was the subject of fierce criticism from former player Mardle, who was in no doubt that the 27th seed was guilty of attempting to disrupt the New Zealander when he missed a second opportunity to seal victory.

Mardle said during Sky Sports' coverage: "It looks absolutely despicable behaviour by a professional darts player. Every time I see it, it's a case of how desperate are you? What we see is he moves in to get closer to Bernie Smith, then he lets out the cough."

Pipe responded by saying he was not guilty of underhand tactics.

PIPE WINS | The Force finally gets the win he needs to set up a match against Phil Taylor in round two#WHdarts#LoveTheDartspic.twitter.com/JmeI5JicGv

"I'm bitterly disappointed with the comments which were made on Sky Sports and it's not nice for me and my family to hear," he said in a statement.

"I would never do something to put another player off and Bernie didn't say anything to me on the night. As far as I'm aware there is no issue from his side and this has been blown out of proportion.

"My focus is on preparing for my second-round game against Phil Taylor on Saturday. It's an honour to playing him in his final tournament and I want to concentrate on that match."