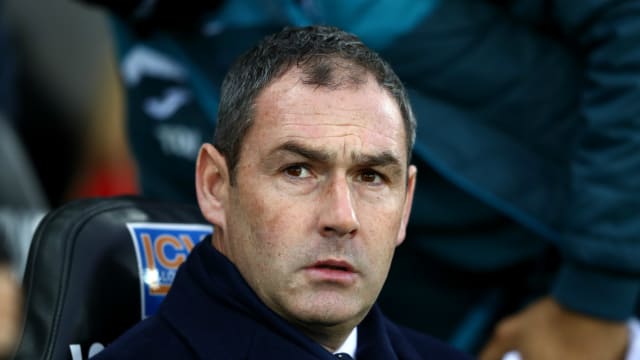 A run of eight losses from their last 10 Premier League matches saw Swansea cut adrift at the bottom of the table, four points adrift of safety, prompting Clement's departure.

Clement won the Premier League Manager of the Month award shortly after his arrival as Bob Bradley's replacement in January, then led the Swans to survival.

But after Gylfi Sigurdsson and Fernando Llorente were sold to Everton and Tottenham respectively, the Welsh club have struggled this time out.

We can confirm that the club has tonight parted company with head coach Paul Clement.

Clement said in a statement released via the League Manager's Association on Thursday that keeping Swansea in the Premier League last season was his finest achievement.

"It is with great sadness and regret that I have left my position as head coach of Swansea City," Clement said.

"I would like to thank the majority owners Steve Kaplan and Jason Levien for the opportunity to lead the team for the past 12 months as well as the supporters trust and the many loyal fans of the club.

"When I arrived at Swansea City on January 3, the team had 12 points and were bottom of the league. Together we managed to achieve 29 points in 19 games, culminating in a 15th place finish and ensuring the club would compete in the Premier League for a seventh consecutive year.

"It was by far my proudest and greatest achievement as a coach. However, this season, in very challenging circumstances I was unable to replicate the positive results

"Behind the scenes I worked with some great people. I enjoyed a very positive relationship with the chairman Huw Jenkins who I know cares deeply about the football club. I thank the players for their efforts and wish them the all best for the future.

"I now look forward to my next challenge in football management."

"I have the respect of the players as a player and person, they've been as good as gold. Whatever I need the club have said they are behind me.

"We have a big battle on our hands. We have a big responsibility because we, as players, have not performed." pic.twitter.com/7OsCrQo8aF

Swansea will be led by club icon Leon Britton for Saturday's crunch Premier League game at home to resurgent Crystal Palace, but the 35-year-old has stressed he has no desire to take the job on a permanent basis.

Britton will be without Wilfried Bony, however, after the striker was ruled out as a result of a hamstring injury collected in the opening minutes of Monday's 3-1 loss at Everton - Clement's final match in charge.

Names including Frank de Boer, Ronald Koeman, Tony Pulis and Slaven Bilic - all sacked by Premier League clubs this season - are among the managers to have been linked with the vacancy.