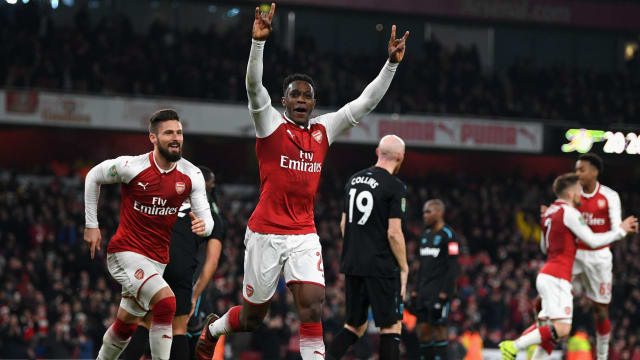 Arsenal reached the EFL Cup quarter-finals for the first time since 2010-11 thanks to a narrow 1-0 win over West Ham at Emirates Stadium on Tuesday.

Danny Welbeck scrambled home the only goal late in the first half to decide a contest that was otherwise devoid of opportunities.

With at least one eye clearly on Friday's visit from Liverpool, Arsene Wenger utilised the full depth of his squad and handed the captain's armband to Theo Walcott.

The stand-in skipper fluffed a chance to break the match open when he headed a rare sight of goal wide, although his embarrassment was soon spared as Welbeck forced a loose ball past the recalled Joe Hart in the 42nd minute.

A fit-again Javier Hernandez joined Hart in the Hammers' starting XI, but neither he nor any of his team-mates could conjure a single shot on target - Welbeck's was the only one in the contest.

And while the Gunners remain in contention for the one trophy in English football that has eluded Wenger, the Frenchman's night was spoiled somewhat by Olivier Giroud sustaining an apparent hamstring injury late in proceedings.

11 - Danny Welbeck has ended a run of 11 games without a goal in the League Cup, netting his first in the competition since October 2009 (vs Barnsley). Overdue.

Wenger completely shuffled his pack from the side that edged Newcastle United 1-0 on Saturday, making Moyes' six changes seem like little more than tinkering.

Both sides looked every bit the sum of unfamiliar parts over a disjointed first half-hour that failed to produce any meaningful openings.

Arsenal enjoyed the vast majority of possession but, despite the experience of Walcott, Welbeck and Giroud in attack, were unable to muster a genuine attempt until Sead Kolasinac sliced harmlessly wide in the 37th minute.

That moment of purpose did bring about a livelier spell from the hosts that should have resulted in the opener through Walcott, who wastefully steered his header the wrong side of the left post from Kolasinac's perfect cross.

Instead, it was left to Welbeck to open the scoring moments before the break. The forward scrappily prodded home at the second time of asking from close-range after Mathieu Debuchy nodded Francois Coquelin's delivery back into the danger area.

The only change at half-time was among the officials as injured assistant Stuart Burt was replaced on the line by fourth official Chris Kavanagh.

With chances remaining at a premium, Aaron Cresswell flashed a free-kick across the face of goal in the 64th minute and that rare sight of goal prompted Moyes to introduce Andy Carroll and Diafra Sakho.

But the visitors almost came undone at the other end when an onrushing Hart tripped Welbeck fractionally outside the penalty area, perhaps only avoiding a red card due to attacker's path leading him away from goal.

However, Arsenal ultimately did not require the cushion of a second goal as Giroud's concerning late injury proved the final drama of the contest.