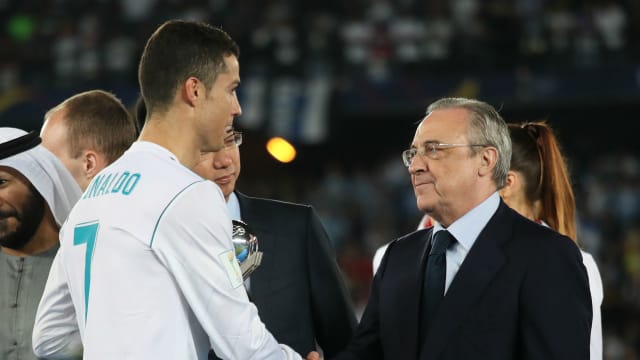 After the match, Zidane described Ronaldo remaining with the club until retirement as "fundamental", while the player himself expressed his desire to do exactly that.

"But it does not depend on me," he added. "Because I'm not the boss of the club."

Given that is, more or less, Perez's job description, it seems Ronaldo has little reason to worry.

"Cristiano wants to stay in Madrid and I also want him to finish here," the 70-year-old told COPE.

"He is a spectacular player and has a contract in force for this season and three more."

Perez went on to liken Ronaldo's impact on Madrid to that of club icon Alfredo De Stefano.

"Cristiano is the best player without discussion in the current era, with all the virtues that has make up a unique and very special player. Cristiano will mark the future of football."

Zidane added the world title to back-to-back European crowns and last season's LaLiga and, although Madrid's campaign domestically is yet to ignite this season, he retains the backing and admiration of the president who made him a 'Galactico' signing in 2001.

"Zidane came in 2001 and helped rebuild this modern Madrid. Now, as a coach, with all the knowledge he has of the club, he is making a spectacular year," Perez added.

"He has achieved eight titles of 10, it is practically impossible to do more in such a short time. We are all delighted with Zidane, Cristiano and all the players.

"I think we have the best in each position. And then, we have a lot of young players with a great future who are helping to create a good atmosphere and I think that's the success of this Real Madrid."