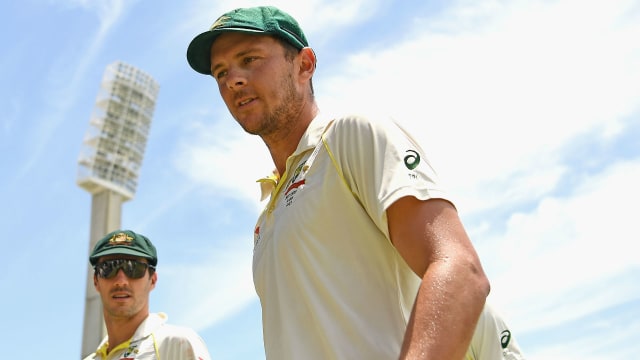 Australia were left to lament the rain that fell late on the fourth day of the third Test in Perth but Josh Hazlewood felt the dismissals of Alastair Cook and Joe Root were key to their charge towards Ashes glory.

Heavy showers brought a premature end to Sunday's action at the WACA, with England 127 behind on 132-4, first-innings centurions Dawid Malan and Jonny Bairstow at the crease.

Hazlewood (2-23) removed openers Mark Stoneman and Cook - the latter courtesy of a superb one-handed return catch just above the turf - before Nathan Lyon ousted Root with his first ball and Mitchell Starc accounted for James Vince (55) with an unplayable delivery.

More rain is forecast for Monday but with Moeen Ali out of form and England's tail looking vulnerable against Hazlewood, Starc and Pat Cummins, Australia remain confident of a victory that will regain the urn.

Will the #Ashes return to Australia tomorrow? Catch up on the scores here: https://t.co/57Bmg3zS3P#Ashespic.twitter.com/kSPHjA4Css

"That [Starc's ball to Vince] was pretty special, I think that's getting anyone out!" Hazlewood told BT Sport.

"We're a bit frustrated, but it's part of cricket, we would have loved one or two more wickets tonight but unfortunately it started raining.

"To get Cook and Root back in the sheds is very important. We feel pretty close but you're never too sure until it actually happens. We've taken their tail's wickets quite quickly so hopefully it's the same again tomorrow.

"We're pretty confident, we're in a great position and hopefully we can finish them off."

Earlier in the day, James Anderson finished with 4-116 as Australia reached 662-9 declared and the seamer, who moved to within one of fifth-placed Courtney Walsh on the all-time wicket-takers list, urged his side to come out fighting on Monday.

Another shower has delayed the restart here #Ashespic.twitter.com/LReVrFlrgf

"Obviously we're behind the game a little bit," he said. "We are where we are. We've got to try and keep fighting. The rain helped us, tomorrow we've got to come with a good attitude and hopefully fight through the day.

"The application today was really good, James Vince got a ball that was unplayable, Dawid and Jonny got us through to the end and we've got to rely on everyone tomorrow to get us through the day.

"We got ourselves into a great position, to only get 400 from there [368-4] was a real disappointment to us.

"But we can't do anything about that now, all we can do tomorrow is come with a good attitude and try and get through the day."