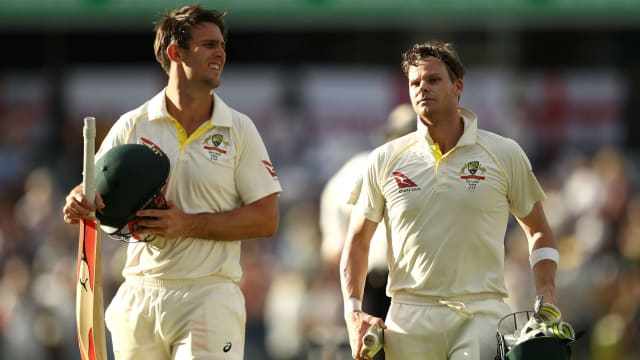 Steve Smith and Mitchell Marsh put England's bowlers to the sword on day three of the third Ashes Test in Perth on Saturday.

The pair shared an unbroken fifth-wicket stand of 301 to move Australia into a commanding lead at the WACA as England's hopes of retaining the urn faded away.

- Smith makes a second Test double hundred, reaching stumps 229 not out for his highest score in the longest form.

- Marsh (181no) brings up his maiden Test century, joining brother Shaun and father Geoff in reaching three figures for his country.

MOMENT OF THE DAY

Take your pick, Australia. Marsh's first century - on his home ground, no less - was met with a WACA roar matched only by that which greeted Smith reaching 200.

- This is the first time Australia have scored centuries at number six in consecutive innings since Damien Martyn's 117 vs South Africa at Sydney 2001-02 and his 133 vs the Proteas at Johannesburg 2002.

- This is Smith's seventh ton against England, tied 12th-most overall and the most of any current Test batsman (Amla six).

"My family aren't allowed to go to the toilet while I'm batting so there's probably a few full bladders up there!" - the Marsh family superstition was evidently working for Mitchell on Saturday.

"We've done as much as we can today and given our all and that's all you can do." - Assistant coach Paul Farbrace puts a brave face on it for England.

HOW MANY WILL SMITH WANT?

Marsh suggested afterwards that Smith would like a lead in the region of 250-300, with the Australia captain perhaps eyeing a maiden triple century.