Smith and Marsh gorge themselves as England put to the sword 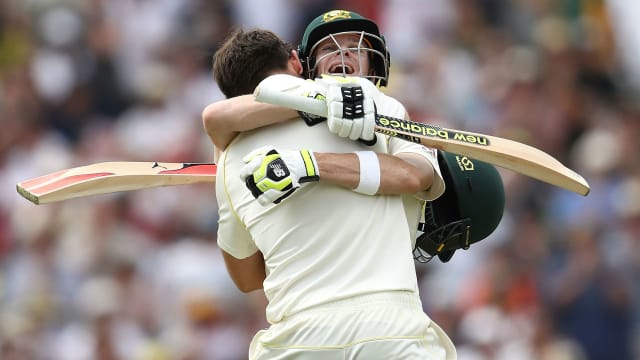 Australia captain Steve Smith made a sublime double hundred and Mitchell Marsh a maiden Test century as England saw their Ashes hopes fade further into the distance in Perth on Saturday.

The tourists boasted a lead of 200 coming into day three of the third Test at the WACA but by the time stumps were drawn they found themselves 146 behind as Australia closed 549-4.

England's bowlers toiled manfully on an unresponsive surface but they could muster little to trouble Smith (229 not out) and Marsh (181no), who shared in an unbroken stand of 301 that saw the visitors' hopes of retaining the urn ground to dust.

The sole wicket to fall went to Moeen Ali as Shaun Marsh departed for 28 and at 248-4 England still led by 155 but Smith - who reached his highest Test score - and Mitchell Marsh occupied the crease for more than 77 overs without alarm.

Smith's double hundred came up off 301 balls while his partner reached three figures from just 130, his 17th four taking him to the landmark, greeted with a roar of delight as he joined brother Shaun and father Geoff, watching on in the crowd, as an Australia Test centurion.

Steve Smith is good at cricket.#ohwhatafeeling@Toyota_Auspic.twitter.com/xDc35HqBf9

It was to Mitchell Marsh's credit that he was not outshone by the sublime innings of his captain, the pair drawing equal acclaim from the crowd as Australia took a giant leap towards regaining the Ashes.

Smith resumed the day on 92 but any notion of a nervous wait for his century was soon dispelled with fours taken from Stuart Broad and James Anderson - a glorious on-drive preceding a whip to leg.

Shaun Marsh took Moeen for back-to-back boundaries but perished from the next delivery in edging the off-spinner to slip.

England's desperation to remove Smith was summed up as Joe Root wasted an lbw review for a ball that was heading down leg and the home captain's 150 came up with a two off Chris Woakes soon after lunch.

The milestones kept coming, Mitchell Marsh reaching his half century with a single off Moeen before England reviewed another lbw call on Smith, only for replays to show Anderson had over-stepped, with the outcome favouring the batsman on umpire's call in any case.

Mitchell Marsh plundered successive fours off consecutive overs from Anderson and Craig Overton - whom it was revealed was bowling with a hairline crack of the rib - and in the last over before tea he recorded his maiden Test hundred with a square driven boundary off Broad.

What a view of a magic moment for Mitch Marsh and Australia! #Ashespic.twitter.com/HzF3OSKIoI

The Western Australia native celebrated with gusto on his home ground and his captain followed suit in the final session as a scampered single brought up Smith's inevitable double century.

Mitchell Marsh's 150, the 250-stand and Australia's lead passing 100 all came in quick succession as England looked bereft of ideas, Root turning to his own occasional spin - as well as that of Dawid Malan - in an unsuccessful bid to break through on a demoralising day for the tourists.