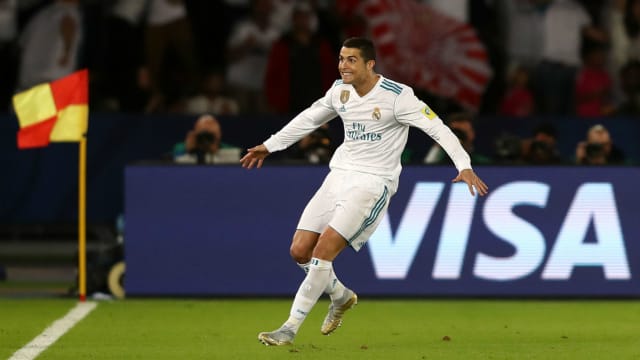 Cristiano Ronaldo led the way as Real Madrid beat Gremio 1-0 to successfully retain the Club World Cup in Abu Dhabi on Saturday, securing them a fifth trophy of 2017.

Gremio coach Renato Gaucho claimed in the build-up that he was a better player than Ronaldo, and the Portugal star provided the perfect response on the pitch, frequently troubling the Brazilian side and scoring the all-important goal.

Madrid often looked susceptible on the counter-attack in their 2-1 semi-final win over Al Jazira, though the same could not be said against Gremio as the European champions exerted complete control in the first half.

Plenty of chances fell Madrid's way, though it took them until the second half to break the deadlock and there was more than a hint of fortune about it, with Ronaldo's free-kick somehow finding its way past Marcelo Grohe and making him the first player to score in successive Club World Cup finals.

Luka Modric saw a 25-yard effort of his own tipped on to the post soon after, as Madrid's search for a second left them frustrated.

Ultimately it did not matter, as Gremio failed to cause the LaLiga team any problems in spite of their own desperation and Zinedine Zidane's men had little difficulty holding on to claim the Club World Cup title for a third time in four years.

It did not take Madrid long to establish dominance and they kept the South American champions penned in their defensive third for extended periods during the early exchanges.

The Spanish side were not shy in getting shots away, though most of them were from distance and caused Gremio goalkeeper Grohe few problems.

Grohe had to be quick off his line in the 21st minute, however, as he rushed out to smother Raphael Varane's effort after Sergio Ramos flicked on a corner, with Modric shooting wide from 20 yards a few moments later.

Gremio eventually had a chance of their own and they went close, Edilson's 40-yard free-kick flying agonisingly over.

And Ronaldo threatened in similar fashion just before the break when his long-range shot from a set-piece grazed the roof of the goal.

Madrid's dominance showed no sign of letting up after the interval and few could claim they were not deserving of the lead when they finally ended Gremio's resistance.

Ronaldo dazzled Jailson with some quick stepovers and lured him into a foul, before shooting through the wall from the resultant 25-yard free-kick and finding the bottom-left corner.

Another final in 2017, another goal for @Cristiano!

The Portugal star then had another ruled out a few minutes later due to Karim Bernzema straying offside.

Modric nearly added a legitimate second just after the hour mark, but Grohe managed to tip his effort on to the post.

Gremio's need to throw men forward provided Madrid with several opportunities to counter during the final stages and, although they failed to add to the score, Zidane's men comfortably held on to lift the Club World Cup, giving them the perfect boost ahead of El Clasico next Saturday.