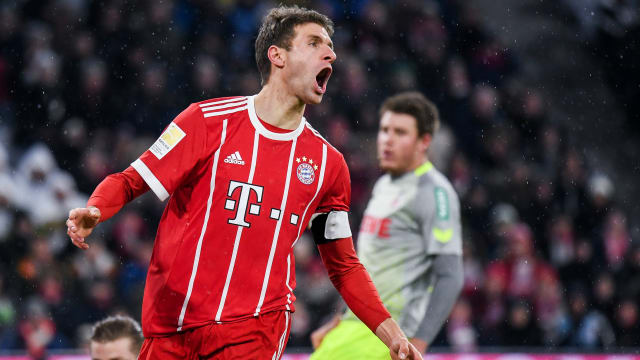 Bayern Munich stretched their lead atop the Bundesliga to nine points with a hard-earned 1-0 win over bottom-placed Cologne at the Allianz Arena on Wednesday.

Robert Lewandowski scored for the eighth successive home league match as the champions were made to be patient in capitalising on RB Leipzig's slip-up at Wolfsburg.

Cologne, cruelly denied a breakthrough victory on Saturday by a last-gasp 4-3 home loss to Freiburg, exhibited renewed resilience in holding the hosts to a scoreless first half on their own turf.

The weight of possession and shots on goal against them eventually proved too great to resist, though, with Lewandowski bundling in a deserved opener in the 60th minute.

In only his third match since taking over from the sacked Peter Stoger - now Borussia Dortmund boss - on an interim basis, Stefan Ruthenbeck will have been encouraged by the way Cologne refused to fold over the final half hour, even if they still only have three draws to show from their first 16 league fixtures this term.

But on the night Franck Ribery became the club's most-capped foreign player with 366 competitive appearances, Bayern would not be denied the chance to celebrate going further clear in their quest for another domestic title.

Timo Horn loomed as being integral to Cologne's hopes of extracting anything from the match and the goalkeeper was alert early, smothering a difficult chance for Thomas Muller in the 13th minute.

The visitors' compact defensive shape somewhat contradicted Ruthenbeck's pre-match prediction of a bold approach, although it did help see off a couple of corners and a tame attempt from Lewandowski.

Lewandowski was next unable to make a clean connection with a tricky shot on the turn as the deadlock remained intact at the half-hour mark.

Despite their vast amount of possession, Bayern were still required to snuff out the occasional counter-attack and were thankful to see Milos Jojic's deflected effort drop over the crossbar.

Arturo Vidal attempted to manufacture the opener by curling an audacious left-footed shot around the far post, while Muller got his angles wrong with a header under pressure from Horn.

Jupp Heynckes called on James Rodriguez and Kingsley Coman for more attacking inspiration at the break, but it was Lewandowski who should have made the difference shortly after the restart as he somehow transpired to head over at point-blank range.

Eventually, though, the prolific Polish striker usually finds a way and he did just that on the hour, forcing the ball past Horn after Muller nodded Jerome Boateng's dinked pass into his path.

Coman would have made the points safe had his downward header not come back off the crossbar soon after the opener, before Horn parried a firm effort from Sebastian Rudy.

At the other end, Tom Starke, standing in for injured pair Manuel Neuer and Sven Ulreich for a second match, proved his value with a sharp late denial of Lukas Klunter that made the three points safe for Heynckes' men.