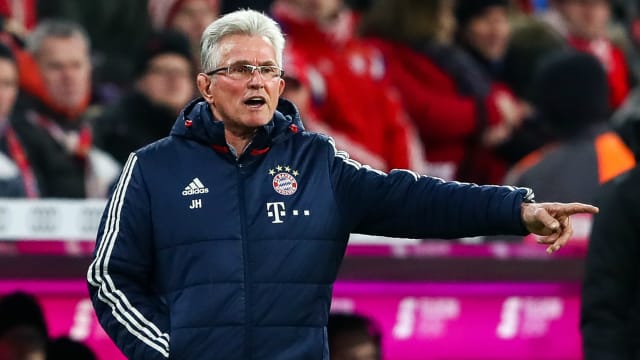 Jupp Heynckes said Bundesliga leaders Bayern Munich lacked "ease and verve" in their win over Cologne, though the German boss was still satisfied with Wednesday's victory.

Defending champions Bayern opened a nine-point lead atop the summit with a hard-earned 1-0 win at home to bottom-placed Cologne midweek.

Robert Lewandowski broke Cologne's stubborn resistance in the second half, scoring for the eighth successive league match at the Allianz Arena.

Speaking afterwards, Bayern head coach Heynckes said: "You could tell we struggled a lot against a very defensively-minded Köln team who were very well-organised.

"I missed our quick play from defence, our precision and, especially in the first half, our changes of pace. We improved a bit in the second half.

"We lacked ease and verve, but we can still win matches like this one, and that's a good sign.

"We had to make fundamental changes at half-time. Matches like this one happen. We've had a demanding programme, and two difficult matches are still awaiting us."

"We didn't let the ball do the work in the first half, we didn't play vertically enough. You can't be as attack-minded as we were in the second half against any opponent, but we had to do something.

"After we took the lead the team knew we have two matches ahead of us this year, and that we're not at 100 per cent in terms of energy. We let the ball do the work and were content with a narrow 1-0 victory."